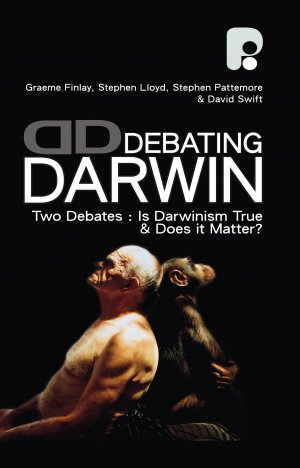 Debating Darwin (Paternoster, 2009) is a multi-author book, seeking to debate Darwinism first on theological grounds, and then on scientific grounds. Each half of the book has four chapters: two setting out the case for and against, and two responses. It has some strong points, but the choice of two very different authors to oppose Darwinism, along with the theological approach of the pro-Darwinism authors, combine to make the book into something that is likely to weaken the faith of the average evangelical Christian. This is probably not what the authors (or the strikingly invisible editor) intended.

First the good parts. Stephen Lloyd is the theological opponent to Darwinism, and his chapters are extremely cogent and very refreshing. (I know Stephen personally, but I would hold the same opinion even if I did not.) A strong case could be made against Darwinism (or Neo-Darwinism) based on what the Bible says in various different places. But Lloyd’s approach is much more powerful, as he focuses on the big storyline of the Bible. His claim is that “Accommodating Neo-Darwinism” to Christianity “leaves the biblical story, centred on the resurrection, incoherent”, and he expands on that by examining the doctrines of Adam, the global flood, and the goodness of the original creation (“no agony before Adam”). This is essentially the same case that Lloyd made in a debate I organised in Brighton in 2010 (see my write-up of the debate and listen to it on bethinking.org), and also in a talk from 2009.

The first pro-Darwinism chapter, by Graeme Finlay and Stephen Pattermore, is largely about issues of literary genre, and also attempts to drive a wedge between physical death and spiritual death. As with Denis Alexander’s book, I didn’t find this convincing. Their second chapter, in response to Lloyd, essentially amounts to an all-out attack on the creation-fall-redemption-restoration framework for understanding the big storyline of the Bible. They portray this storyline as being cyclic, rather than linear, making the (quite unfair) assumption that the restoration envisaged is simply a return to the original state of things. In its place, they put forward a purely evolutionary and progressive understanding of the biblical narrative. This is unfortunate, as it puts them at odds with much mainstream evangelicalism. It is also revealing, as they seem to concede Lloyd’s main point: that the Neo-Darwinian narrative cannot be reconciled with the narrative of creation-fall-redemption-restoration.

The scientific opponent to Darwinism, David Swift, couldn’t be more different to Lloyd in his views. Unlike Lloyd, Swift has no theological objection to evolution, and is quite comfortable in principle with the idea of common descent (even if he is not sure it is true). His main objection to Neo-Darwinism is that he doesn’t think the mechanism is capable of producing new genes, and he puts forward a strong case to that effect. His view seems to be that God somehow injected new genetic information at various points during the course of earth history, leading to the sudden introduction of new forms of living creature (birds, mammals, etc).

The scientific pro-Darwinism chapter, by Graeme Finlay, sets out a strong case for common ancestry, based on shared “mistakes” in the genome (ERVs, jumping genes, etc). The discussion is quite technical, particularly for a book aimed at “ordinary” readers. This case isn’t answered particularly strongly, as Swift doesn’t really have any objections to common ancestry, in principle. So the reader is left with the impression that common ancestry is pretty well established by the genetic evidence.

What is the combined effect of all of these chapters? First, your average evangelical would get the impression that their understanding of the biblical storyline, as creation-fall-redemption-restoration, conflicts with the storyline of (Neo-)Darwinism, with its account of the common ancestry of people and all other living things. So either Christianity (thus construed) is true, or common ancestry is true. That is the impression given by the first half of the book. The impression given by the second half of the book is that common ancestry is (probably) true. Put these together, and the conclusion is obvious: scientific evidence suggests that the Christian faith, as most evangelicals understand it, is false.

I can’t imagine that any of the authors intended the book to give this impression. It seems to be a consequence of poor editorial judgment. The book would have been much better if it had a stronger editor. As it stands, no editor is even named. Whoever it is didn’t seem to understand that there are many different kinds of objection to Darwinism, and that you can’t just put two very different opponents to Darwinism together and expect the book to have a coherent storyline. There is no introduction to the book, explaining the parameters of the debate, and no attempt to bring things together at the end. In fact, the editorial process seems to have been calculated to minimise the actual engagement between the authors. In an ordinary debate, each speaker would have at least three opportunities to speak, and each speech would follow on from the previous one, so that the second speaker would modify their opening speech based on the opening speech of the first speaker, and so on. But in this book, the opening chapters were submitted independently, and then the responding chapters were submitted independently, with no opportunity for any other engagement. There is no hint that the opposing speakers have ever met each other, or knew anything about each other prior to writing their chapters, so they end up talking past each other much of the time.

However, there are limitations to the debate format, even in the best of circumstances. There is a strong temptation for the contributors to try to “win” the debate, and to err on the side of overstating their case. Debates also perpetuate the idea that there are two sides to the issue, with the correct response being to simply choose one side or the other. I’m not sure that is the way forward: is it not worth exploring novel approaches to the issue, rather than regurgitating the same old polarised views again and again?

A couple of final comments in response to the impression given by the book. First, I’m quite confident that many or most evangelical proponents of theistic evolution, or evolutionary creationism, do indeed embrace at least some version of the creation-fall-redemption-restoration framework for understanding the biblical narrative. So it would not be fair to assume that all proponents of Darwinism see things in the same way that Finlay and Pattermore do. Second, the argument for common ancestry based on shared mistakes in the genome falls down as soon as those “mistakes” are shown to have a function. Finlay shoots himself in the foot on this point in the end of his chapter, when he draws attention to the function of several ERVs or jumping genes, and Swift briefly makes this same point. I don’t consider myself qualified to adjudicate on this issue, but it has been suggested that the functional ERVs in our DNA might have been part of God’s original created design, rather than relics of our evolutionary past.