It is with some reluctance that I turn to the topic of creation and evolution. It’s something I’ve thought about a lot in years gone by, but I’ve tried to avoid it more recently. The whole debate is so polarised, and shows little sign of coming any nearer to a resolution, so I’ve allowed my interests to roam in different directions. But I’m preparing some talks on the early chapters of Genesis, so I feel I ought to make myself a bit more familiar with the way things currently stand.

In what follows, I’d like to focus on three exhibits, only one of which seems actually to be constructive in taking the church nearer to unity and maturity on the issue. 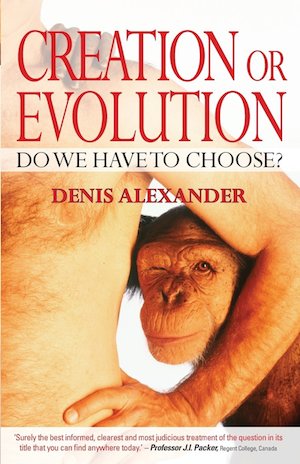 Exhibit A is Denis Alexander’s 2008 book, Creation or evolution: do we have to choose?. I read this not too long after it came out. It’s well written and covers a lot of ground. The basic thrust of the book is that it is possible to be an evangelical Christian, believing the Bible to be the word of God, and still to accept the findings of modern science when it comes to the evolution of life, particularly human life (this position is known as theistic evolution or evolutionary creationism). A large chunk of the book is devoted to the scientific evidence, and the book provides a fascinating primer in the relatively young field of genomics: the study of DNA and the genome. The rest of the book is an attempt to reconcile biblical Christianity with the evolutionary narrative.

Alexander gives it a good shot, but I have to say that his synthesis is far from persuasive. It hinges largely on a sharp distinction being drawn between physical death and spiritual death, so that billions of years of physical death can give rise to life as we know it, after which God sends spiritual death into his very good creation as a punishment for human sin. The trouble is that the Bible simply doesn’t make this distinction, and it leaves us puzzling over why Jesus’ physical death should have anything to do with the problem of sin. The book also makes it clear that it is far from easy to reconcile the biblical account of Adam and Eve with the prevailing secular account of human origins.

However, my main problem with the book, at least in the context of this particular post, is its unwillingness to engage in constructive discussion on the issue. Where does Alexander direct me to find a good defence of the opposite point of view? Which creationist works does Alexander engage with? You will search in vain for any attempt to answer those questions — except for two brief mentions of Henry Morris. Not a single living creationist is named in the book. Alexander would clearly not deign to condescend to their level. ‘Christians who make it their mission to attack evolution, in the mistaken assumption that it is anti-God, are embarrassing and bring the gospel into disrepute’ (p. 352). (But, lo, is that a revised and enlarged second edition I see coming out in September? Perhaps there is room to be optimistic?) 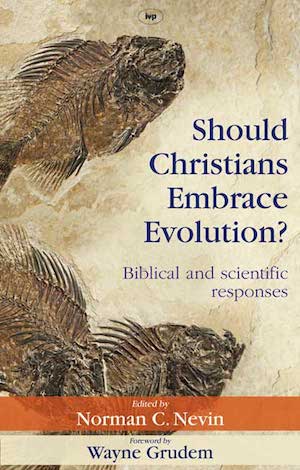 So we move swiftly to Exhibit B, the 2009 book, Should Christians embrace evolution?, edited by Norman Nevin. I bought this book not long after it came out, but it suffered the fate of most of my books, and lingered on the bookshelf (well, various successive bookshelves) until last week. The book is a multi-author response to the biblical and scientific issues dealt with by Alexander. Highlights are an excellent chapter by Michael Reeves on the importance of believing in a historical Adam who fathered the whole human race (also available here), a wide-ranging (if slightly unstructured) chapter on the theological problems with the theistic evolution position by David Anderson (who has published other responses to Alexander’s book, both shorter and longer, available here), and an illuminating chapter on genomics by Geoff Barnard (you can watch him speaking on the topic here).

But, apart from a few highlights, to be honest, I wish the book had lingered on the shelf for longer. It comes across as a hastily cobbled together response to Alexander’s book. The chapters are mainly either off topic, or badly written, or both. But this is beside the point: the book doesn’t give the impression that it was actually intended to be read at all. Rather, its mere existence is the point. Here is a book, published by respected evangelical publisher IVP, with multiple authors, some of whom you will have heard of, with four pages of glowing commendations, and with a foreword by none other than Wayne Grudem, one of the biggest names in Bible-centred evangelicalism. It’s even got a shiny website. Clearly, without even needing to read a word, you should be able to glean that many prominent evangelicals say a big resounding ‘No!’ to Denis Alexander and his ilk.

I end this post with Exhibit C. This is an ongoing series of discussions between prominent evolutionary creationist Darrel Falk and prominent young-age creationist Todd Wood. Most of these conversations, facilitated by the Colossian Forum, have been taken taking place in private. But they went public a few months ago, in an event that you can listen to here (hat tip: Biblical Creation Ministries). It really is an excellent example of people of widely different perspectives coming together as brothers in Christ and seeking to understand each other.

Creation or evolution: do we have to keep getting nowhere? In keeping with the book titles mentioned above, my question also anticipates a negative answer. No, we don’t have to keep getting nowhere. There is hope, and I am optimistic, that one day, before too long, it will not be so much a ‘debate’ about creation and evolution, with people taking ‘sides’, but a serious attempt by brothers and sisters in Christ to grapple together with these big questions, ‘until we all attain to the unity of the faith and of the knowledge of the Son of God, to mature manhood, to the measure of the stature of the fullness of Christ’ (Ephesians 4:13, ESV).