Live in harmony with one another. … If it is possible, as far as it depends on you, live at peace with everyone (Romans 12:16,18).

Make every effort to keep the unity of the Spirit through the bond of peace (Ephesians 4:3).

[M]ake my joy complete by being like-minded, having the same love, being one in spirit and of one mind (Philippians 2:2).

Do not be yoked together with unbelievers. For what do righteousness and wickedness have in common? Or what fellowship can light have with darkness? What harmony is there between Christ and Belial? Or what does a believer have in common with an unbeliever? What agreement is there between the temple of God and idols? For we are the temple of the living God (2 Corinthians 6:14-16, all quotations from the NIV).

“Good disagreement” is becoming one of Archbishop Justin Welby’s catchphrases. And it’s a wonderful idea. The Church is full of bad disagreement. My previous blog post was about creation and evolution, and that is certainly an example. We simply do not make the effort to understand each other, let alone to love one another. Surely the first step we need to take on the road towards full agreement is to turn our bad disagreements into good disagreements.

Welby was interviewed on The Andrew Marr Show on Sunday (13 July 2014), and the topic of “good disagreement” came up twice.

First (just after 30:30), speaking about the prospect of a schism in the Anglican Communion, Welby commented:

As Christians we believe that we are part of one family, we’re joined inextricably not by our own choice but by the choice of God, by our common faith in Christ. Schism is awful. If it happens, it happens. But our calling is to love one another and to find ways of good disagreement in a world that is completely incapable of good disagreement.

This is surely the way forward. We have so much in common as Christians, and once we learn to recognise one another as brothers and sisters in Christ, then it will be much easier to work through our disagreements about lesser issues. Hopefully this will be the case with the issue of women bishops too. Speaking at the General Synod debate earlier this week, Welby said,

Today we can start on a challenging and adventur[ou]s journey to embrace a radical new way of being the church: good and loving disagreement amidst the seeking of truth in all our fallibility; a potential gift to a world driven by overconfident certainties into bitter and divisive conflict.

But the idea of “good disagreement” has a certain ambiguity to it.

Later in the interview with Andrew Marr (just after 33:45), Welby described some conversations he had had with Muslim leader Ibrahim Mogra:

there was absolutely no sense of conflict there — we disagreed. [AM: it was a proper conversation.] It was a proper, good disagreement.

Within in the Church, if we are to be recognizably the “temple of God”, and recognizably a body of believers, rather than a mixed body of believers and unbelievers, then we must aim not for “good disagreement” about our fundamental convictions, but for complete unity on those matters. We must aim to be “like-minded, having the same love, being one in spirit and of one mind”, and we must aim for nothing less. Of course, there will be differences, but those will be differences within the context of agreement about the essential elements of our faith.

In those cases, “good disagreement” must become the kind of “good disagreement” that Justin Welby was able to have with Ibrahim Mogra. In our dealings with Muslims, we recognize — publicly — that we have fundamentally different understandings of God, Jesus and the world. We don’t pretend that we are basically the same — though, of course, we will often work together on issues of common concern. But we follow Paul’s exhortation to “live at peace with everyone”, as far as it is possible to do so.

And that must be the way forward for us as a Church, if our disagreements, once we have explored them carefully, prove to be fundamental differences in how we understand God, Jesus and the world. We must — for the sake of the Church and for the sake of the world — try to go our separate ways — to live at peace with each other, but not to pretend, either to ourselves or to the world around, that we are basically the same. The Church shouldn’t seek to model “good disagreement” in the sense of getting along in peace even though we disagree as much as it is humanly possible to disagree! We should model that kind of “good disagreement” in our dealings with those outside the Church. Inside the Church, we should be marked not by the quality of our disagreement, but by the quality of our agreement.

But is that even conceivable for the Church of England?

On the left we have England, and on the right we have the Church of England (not to scale). 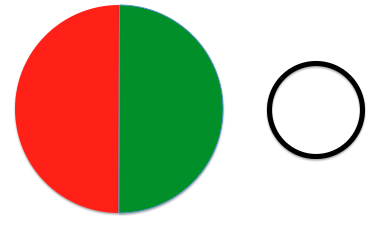 You will notice that England is divided in two. The colours are not significant (I won’t tell you which is which!), but it it supposed to represent Christians and non-Christians.

Now, where should we place the black circle?

Currently, I think the black circle is bang in the middle. What I mean is that, however you construe “Christian”, there are lots of people in the Church of England who would, under that definition, be non-Christians.

But, from another perspective, Jesus came to show us the kind of love that breaks down all the petty divisions that permeate human society, and to teach us to accept each other as we are. Jesus came to rescue us from our hatred and to affirm us in who we are. Christians are people who have embraced Jesus’ message of inclusivity, and non-Christians are people who think we need some kind of radical change before we are acceptable to God.

Both of those perspectives are represented within the Church of England. (I won’t pretend to know the relative proportions. Honestly, I have no idea about that. The popular impression is that people are either “pro-gay” and “pro-women” or “anti-gay” and “anti-women”. But there are plenty of people who are in favour of women bishops but hold to a traditional view on same-sex relationships, so the popular impression is extremely misleading.)

So, what are the options?

First, following from what I said above, we could aim for fundamental agreement within the Church as to what Jesus is all about. Then we would end up with one of the following: 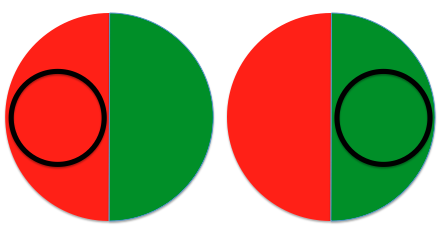 In one case (pick a colour), this would mean a fundamental agreement that Jesus came to rescue us from the punishment that our sins deserved. It would make the Church very unpopular with the establishment. It would mean that the “liberals” in the Church would (voluntarily or otherwise) all leave, en masse.

In the other case (pick a colour), it would mean a fundamental agreement that Jesus came to show us true inclusivity. It would make the Church very popular with the establishment. It would mean that the “traditionalists” in the Church would (voluntarily or otherwise) all leave, en masse.

I find it very hard to imagine either of these possibilities happening. I can’t see the central powers of the Church deliberately making it intolerable for either group to remain in the Church. First, there isn’t the level of agreement necessary among the bishops or within the General Synod to allow this to happen. And second, the central powers are acutely aware of practical, financial considerations, and it would be almost suicidal (unassisted!) to take any steps that would send lots of bums off pews. And no local church really wants to leave the Church of England, not least because they would have to leave their buildings! As long as each local church can carry on pretty much as it pleases, and is able to basically ignore what goes on elsewhere, they are likely to be happy to stay. But it’s not inconceivable that things could begin to tip in one direction or the other; indeed, I sincerely pray that they will — in the right direction!

Another option is for the Church to split in two: 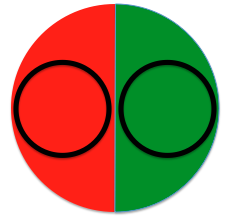 No, it’s not the face of a very colourful insect.

In this case, the two irreconcilable perspectives in the Church of England agree amicably to go their separate ways. This, I think, is what “good disagreement” about fundamental issues ought to look like in practice. No one is suggesting a merger between the Church of England and the Muslim Council of Britain. It is better that we remain as separate organisations, and seek to engage with each other and live peacefully side by side.

The trouble is that I can’t see it happening. The whole institutional structure of the Church of England assumes that it is one institution for the whole country. The country is divided into two provinces, and 43 dioceses, each of which has one diocesan bishop, and each diocese is divided up into parishes, with every square inch of the country falling into one parish.

If the Church of England split in two (which would make Scottish independence look like a piece of cake, with tea, at the vicarage), then there is no conceivable way that either church would have a convincing claim to be a church for the whole country.

The final option is for things to remain pretty much as they are: 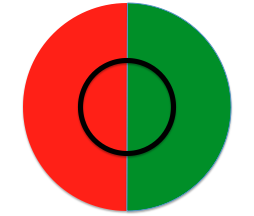 In this case, the Church of England as an institution would need to degenerate into a bland institutional husk, within which a diversity of fundamentally different perspectives are enabled to flourish.

Is this what “good disagreement” and “flourishing” will look like in practice?

I hope not. But I suspect it might be, though it does seem to be one of the features of Anglicanism, with its organic structure and its bishops, that this kind of breadth never feels even remotely comfortable.

Lord of the church, we long for our uniting,
true to one calling, by one vision stirred;
one cross proclaiming and one creed reciting,
one in the truth of Jesus and his word.
So lead us on; till toil and trouble ended,
one church triumphant one new song shall sing,
to praise his glory, risen and ascended,
Christ over all, the everlasting King!