How do we handle our differences and disagreements? For example, what about creation and evolution? 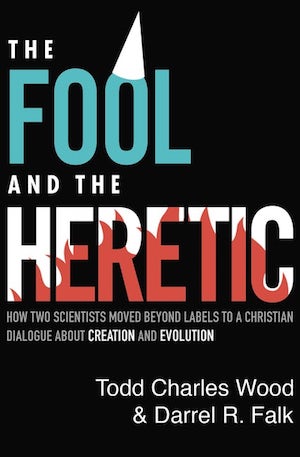 I’ve been reading The Fool and the Heretic: How Two Scientists Moved Beyond Labels to a Christian Dialogue About Creation and Evolution, by Todd Charles Wood and Darrel R. Falk. The authors don’t describe each other in those terms, but the ‘fool’ in this case is Todd Wood, a young-age creationist, and the ‘heretic’ is Darrel Falk, an evolutionary creationist.

The book, published in 2019, emerged from a series of face-to-face conversations involving Todd and Darrel. These conversations (which came to my attention a few years ago: 1, 2) were convened by The Colossian Forum, an organisation with the mission ‘to equip leaders to transform cultural conflicts into opportunities for spiritual growth and witness’. The third contributor to the book is Rob Barrett, from The Colossian Forum, who introduces the authors and offers reflections along the way. He writes:

To the majority of scientists, Todd’s views are foolish. Todd, in their view, is practicing pseudoscience. He may be really smart, but he’s misleading others by misusing his intelligence. … To many Christians … Darrel is a false teacher because he does not believe the earth was created the way Genesis 1 seems to them to describe it. … To such Christians, if you accept evolutionary creation, you are a heretic (p. 22).

The book does two things. One thing the book does is to introduce two different views on origins. It’s difficult to think of two better people than Todd and Darrel to represent the young-age and evolutionary creation positions. The other thing the book does is to offer a case study in handling disagreements. Todd and Darrel find that they have so much in common (as evangelical Christians), and they are able to develop a genuine friendship as they explore their disagreements. The second aim of the book seems to dominate, so that the book is perhaps less useful than it might otherwise have been, if the reader is primarily interested in exploring the issues themselves.

Rob Barrett describes two ways in which Christians typically handle their differences. One way involves ‘pushing out those who do not agree with them’, and the other involves entering ‘a tacit agreement that they will not address the subject over which they disagree’ (p. 51). This book gives an excellent example of a better way forward, in which ‘all things hold together’ in Christ (Colossians 1:17; p. 79).