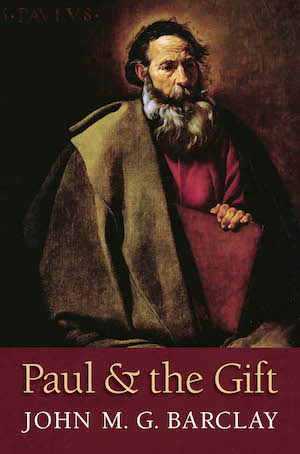 Grace is everywhere in Second Temple Judaism but not everywhere the same (p. 6).

With this simple statement, John Barclay (Lightfoot Professor of Divinity at Durham University) begins to unravel some of the biggest recent controversies in New Testament studies. Was the apostle Paul diametrically opposed to the Second Temple Judaism in which he was raised, because he preached grace and they preached works? This is what many have assumed. But what about the realisation that Second Temple Judaism was also concerned about grace? Is Paul actually much closer to Second Temple Judaism than we might have thought?

The title, Paul and the Gift ‘has a double nuance’: hinting at Marcel Mauss’s anthropological classic, The Gift (1925), and also hinting at ‘divine gift-giving, which for Paul is focused and fulfilled in the gift of Christ (the gift)’ (p. 4).

But surely we know what a gift is? In our world, a gift – a pure gift, that is – is something that is given ‘with no strings attached’ (p. 6). After all, if you expect something in return, it simply isn’t a gift, right?

Well, no. That’s a very modern (and Western) notion of a ‘pure’ gift (p. 59), and would have been completely unrecognised in the ancient world. In practically all other cultures, a gift is given in order to elicit some response. There are better and worse gifts, to be sure, but they all play their part in sustaining relationships. This is true today, probably more than we realise. You give your friend a birthday present, and you hope they will respond, not necessarily by giving you a gift in return, but by showing appreciation, and by recognising the value of your relationship. You give your boss a bit of extra work, or your boss takes you out for a meal, not as a ‘pure gift’ with no strings attached, but in order to sustain a healthy relationship. And so on. That’s simply how gifts have worked, throughout human history.

So what makes a gift into a good gift? What does it mean when we describe God’s gift of (salvation in) Christ as a ‘gift of grace’? This is where there is disagreement, and Barclay identifies six possible characteristics (or ‘perfections’), which could be combined in various different ways in order to answer this question (pp. 69-75):

It is not difficult to see how some notions of ‘gift’ will display some of these characteristics and not others. For example, our modern notion of a ‘pure gift’ is characterised by non-circularity, but not by efficacy. In contrast, most gift-giving in the ancient world was characterised by efficacy but certainly not by incongruity: you carefully choose the recipient of your gift, because you want your gift to produce a good response. For a modern comparison, think of awarding someone a Nobel Prize. It is a gift, but the recipient is chosen very carefully indeed (no incongruity), because you want the money to be used for good purposes (efficacy).

The remainder of Part 1 of the book consists of a masterful survey of the history of interpretation of Paul, identifying which of these ‘perfections’ the interpreter identifies as being characteristic of Paul’s concept of grace.

And here are the results (everyone would describe the God’s gift as ‘superabundant’, so this is not included below)…

In a bit more detail…

The remainder of the book will explore the meaning of ‘grace’ in Second Temple Judaism (Part 2), and then compare that notion with Paul’s understanding of grace in Galatians (Part 3) and Romans (Part 4). Don’t hold your breath; I haven’t read those bits yet…