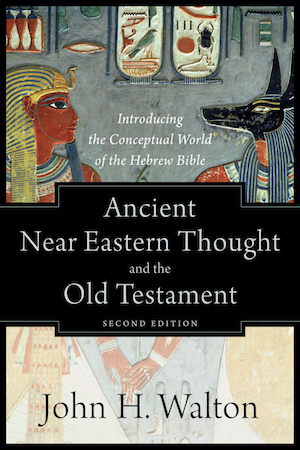 Over the past century or two a huge amount has been discovered about ancient Egypt and Mesopotamia. What difference does this make to how we understand the Old Testament?

For John Walton, professor of Old Testament at Wheaton College, the primary benefit is that these texts and artefacts provide us with a window into the ‘cultural river’ (p. 6) or the ‘cognitive environment’ (p. 10) of the Old Testament. Hence the full title of his excellent introduction to the topic (now in its second edition), Ancient Near Eastern Thought and the Old Testament: Introducing the Conceptual World of the Hebrew Bible.

Comparative studies have something of a mixed reputation. Some are ‘inclined to bring their comparative study to the task of demonstrating the mythological and derivative nature of the biblical text’ (p. 23). In contrast, others ‘view the availability of information from the ancient Near East as an opportunity to prove that the Bible is true or to confirm a traditional date of a particular book’ (p. 27). Walton is suspicious of both approaches:

I would contend that while the committed reader of the Bible may find excuses not to care about comparative studies in the critical or defense roles, he or she cannot overlook its importance for interpretation. If we do not bring the information from the ancient cognitive environment to bear on the text, we will automatically impose the parameters of our modern worldview, thus risking serious distortion of meaning. Consequently the objective of this book is to improve the exegetical analysis of the Old Testament based on information derived from the ancient world (p. 30).

One of the most helpful features of the book is its 40 ‘Comparative Explorations’, which give specific examples showing how our interpretation of biblical texts is sharpened through our understanding of the ancient Near East.

To pick just one of these, there is a fascinating discussion of Joshua 10:12-15, in which we read that ‘The sun stopped in the middle of the sky and delayed going down about a full day’ (NIV). Walton attempts (quite convincingly) to interpret this text within the context of omens. Essentially (as I understand it), the suggestion is as follows. The sun and the moon are visible together in the evening from the new moon until the full moon, after which the sun sets before the moon rises. It was considered a good omen if the sun and the moon are seen together in the evening until the fourteenth day of the month, and a bad omen if they are seen together in the evening on the fifteenth day of the month. When the sun and moon are seen together in this way, it is described using words such as ‘wait’, ‘stand’ or ‘stop’. So if the sun and the moon ‘wait’ or ‘stand’ or ‘stop’ for an extra day, that would be interpreted as a bad omen. Interpreted in this way, it seems that Joshua 10 is not describing a ‘long day’, but is rather describing a set of events (brought about in response to prayer, v. 14) that would have been interpreted as a bad omen by the Amorites, and would therefore have discouraged them in battle, and given an advantage to Joshua. This is just one example of how our understanding of the ancient Near East can shed light on the Old Testament. (For more, see Appendix C in the freely available updated appendixes to Faith, Tradition, and History, ed. Millard, Hoffmeier and Baker.)

Topics covered in the book include: the literature of the ancient Near East; gods, temples and rituals; the cosmos; human origins and role; historiography (how ‘history’ was written); divination and omens; cities and kingship; law and wisdom; and life after death. There is a helpful emphasis on covenant, which is one of the main distinctive features of the Old Testament in comparison with other parts of the ancient Near East.

Walton is at great pains to emphasise that people in the ancient Near East thought of ontology in functional terms, rather than in material terms. In other words, something doesn’t ‘exist’ until it has been given a function in an ordered system. I think he labours that point because in other works he uses that distinction as a convenient way of sweeping aside any apparent conflict between evolution and the Bible. For example, in The Lost World of Genesis One: ‘As an account of functional origins, [Genesis 1] offers no clear information about material origins’ (p. 163). For what it’s worth, I simply don’t think it’s that easy: see my review of The Lost World of Genesis One for more. It’s not that Walton is wrong to point out that there is a greater emphasis on function in ancient Near Eastern ideas of existence. But that observation might not be quite as ground-breaking as Walton makes it out to be.