How should we interpret the first chapters of Genesis? Are they historical? Are they poetic? Are they scientifically accurate? Are they true? 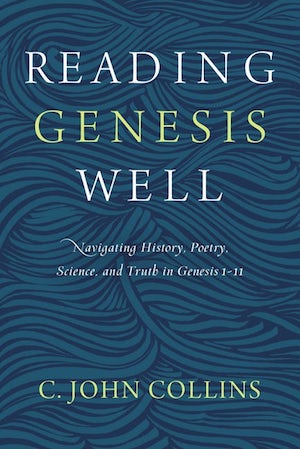 Reading Genesis Well, by C. John Collins, was written to answer precisely these questions. And an excellent book it is too. Published in 2018, it is the latest in a whole series of books by Collins related to Genesis, faith and science: on miracles (2000), science and faith in general (2003), Genesis 1-4 (2006), and Adam and Eve (2011).

Before looking specifically at Genesis 1-11, the first third of the book (100 pages or so) takes us through a careful discussion of the use of language and rhetoric. Collins draws heavily on C. S. Lewis in this section, who is quoted as follows:

The first qualification for judging any piece of workmanship from a corkscrew to a cathedral is to know what it is—what it was intended to do and how it is meant to be used (p. 34).

This leads to a fundamental distinction that runs through the whole book: between what a text says, and what a text does.

Within linguistics, this takes us into the field of pragmatics (‘how people use language to accomplish effects’, p. 41), and specifically into its subfield of speech act theory. Speech act theory is a way of looking at speech as being an act. When you say something, you are performing an action, and actions, as we know, have consequences. So, when thinking about some words that are spoken, and the effects that follow, three aspects need to be distinguished, according to Collins:

Collins then gives the example of a father asking his children, ‘Do you know what the time is?’

The form and words of the question provides what we call the locution, and if the locution made up the entire communication, the proper reply would be ‘yes’ or ‘no.’ Most people know quite well that this kind of reply would be, in most cases, uncooperative; according to context, the desired reply would be something along the lines of, ‘It is eight o’clock’ or ‘My goodness, we should go watch the baseball game!’ or even, ‘Yes, Dad, I’m almost finished with my homework and I’ll be getting to bed soon.’ The illocution, then, would be the goal of eliciting the desired reply and its associated actions (look at the clock, put on the television show, close the book, etc.) and attitudes. The response Dad received is the perlocution; and the communication event is successful if the actual and desired responses match to an adequate extent (pp. 51-52).

This distinction between locution and illocution is crucial to the rest of the book. Collins’s contention—and I think he is right—is that so many interpreters of Genesis pay such close attention to what the text actually says—the locution—that they completely miss the point.

Such a focus on the locution is what Collins refers to as literalism. For example, consider Ezekiel 16:1-3 (NIV):

The word of the Lord came to me: ‘Son of man, confront Jerusalem with her detestable practices and say, “This is what the Sovereign Lord says to Jerusalem: your ancestry and birth were in the land of the Canaanites; your father was an Amorite and your mother a Hittite.”’

If you approach that passage in a literalistic way, you would take it to be a straightforward ‘assertion about the actual genealogy of either Israel as a whole or Jerusalem in particular’. This is how the ‘premier Semiticist’ G. R. Driver understood it: ‘as implying an ethnically mixed ancestry for the Hebrews’. But this is not the intention of the text. It is a sarcastic insult: ‘a racy parable about Jerusalem as a faithless bride to Yahweh’ (p. 53).

Another way of describing this is by making a distinction between world picture and worldview:

The world picture is just what the name implies: what one imagines to be the shape of the world and the things in it … . The worldview … is one’s basic dispositional stance towards the world, such as whether it came from God or exists on its own, whether there is a universal moral code, and so on (p. 94).

A speaker will invite the listeners to picture or imagine the world in a certain way. That is what the text says. But the speaker’s purpose in employing such a world picture is to shape the worldview of the audience.

But if a someone is speaking truthfully, and is promoting a true worldview, does this mean that the world picture will also be true?

This leads us to our question: Under what circumstances may we say that an author asserts that part of his world picture is (in some sense) true? To begin, I take it for granted that the Bible authors have made what we can call a ‘good-faith act of communication,’ meaning any act of communication will allude to some parts of the world picture shared between author and audience. If the validity of the speaker’s point depends on the truth value of the things alluded to, then we may say that a good-faith act of communication implies that the speaker is also affirming the alluded part. Otherwise, the speaker is communicating by deceptive means and thus is not acting in good faith (p. 91).

When might an act of communication not imply ‘that part of his world picture is (in some sense) true’?

Suppose, for example, that I refer to things that Sam and Frodo did, and at the same time I do not clarify whether I believe that The Lord of the Rings is historical. I am not breaking faith with anyone … (p. 93).

This is crucial: there might be cases in which an author and the original audience would have known that such-and-such didn’t actually happen, obviously, because it’s just a story, but there might be no clues to that effect in the literary form in which the story is told. There might also be figures of speech, conventional ways of speaking (‘sunrise’, p. 244), or things that are assumed to be true for the sake of argument. In all of these cases, we must not assume that there will always be a simple connection between the way things are described (the ‘world picture’) and the way the world actually is.

The first thing to do, when reading a text, is to ask what the author is intending to accomplish through the text. For example, why is he talking about Sam and Frodo? Is he urging us to be courageous, perhaps? Only then are we in a position to ask the secondary questions. For example, is he claiming that Sam and Frodo actually existed?

Genesis 1-11 shares much in common with the origin stories of other people groups in Mesopotamia, and ‘it appears that the Mesopotamians aimed to accomplish their purpose by founding their stories on what they thought were actual persons and events, albeit told with a great deal of imagery and symbolism’ (p. 116). As such, and given the unity of Genesis and its place within the Pentateuch, it seems fair to suggest that these chapters should be taken as referring to historical events. In other words, they are not simply fictional tales with no connection to the world in which we live. Their purpose, as with the origin stories of the surrounding nations, was ‘to tell the story of the distant past as part of the worldview story that gives the community its distinctive identity and values’ (p. 123).

For example, Genesis 1 speaks of the different kinds of plants and animals. But

the communicative concern of the texts about the different kinds likely has less to do with the imparting of information (the information was already there) and more with the inculcating of a stance toward the referents: This is Yahweh’s stuff, and he has the right to tell us how to use it (p. 128).

Similarly, there are many other things in Genesis 1-11 that the original (or implied) audience of Genesis (Israel under Moses and Joshua, p. 126) would have perfectly well believed already.

The point is that providing this information would not be a likely function of this set of stories (except insofar as the Pentateuch challenges ‘dangerous’ misrepresentations of the information); rather, the stories set the audience’s knowledge into a proper context (p. 129).

Genesis 1-11, then, is best described as ‘rhetorical history’, as opposed to ‘antiquarian history’. While antiquarian history aims at historical verisimilitude (straightforward and factual), rhetorical history describes ‘actual persons and events’ in such a way that ‘cooperation with the illocutionary force is appropriate (which includes morally right)’. This may involve the narrator employing literary devices such as anachronism in service of the narrative’s rhetorical purposes (pp. 139, 141). (Compare John Goldingay’s description of Genesis 1-11 as ‘parabolic history’.)

What follows is a ‘rhetorical-theological reading’ of Genesis 1-11, with a focus on how these chapters function within the Pentateuch, which is taken to provide a ‘constitution for Israel’, or a ‘worldview story for Israel’ (p. 158).

This is followed by a discussion of the relationship between the worldview of Genesis 1-11, and the world picture it employs in order to advance that worldview. The author might invite the audience to ‘picture things in a certain way’ (‘characterization’), but does this mean the author actually held to this depiction as accurate (‘conceptualization’), or that the author ‘also invites the audience to embrace that conceptualization’ (‘commitment’) (p. 243)?

For example, the biblical authors appear, in certain places, to depict the world as flat, resting on pillars, with a solid vault of heaven stretched out above. But what is the ‘proper communicative intent’ of the passages that portray the world in this way? Collins suggests that ‘not a single one requires the author or audience to commit themselves to a literal world picture in order to perform a good-faith communication’ (p. 248; compare the quote above from p. 91). So characterization does not lead to commitment. Moreover, many of these descriptions appear to be conventional (like ‘sunrise’ in modern English, p. 244). For example, ‘ends of the earth’ as a term is ‘widely spread, apparently conventional, and carries no physical assertion with it’ (p. 249). So characterization does not lead to conceptualization either. It is overly literalistic to suggest that, just because biblical writers portrayed the world in a certain way, this means they believed the world was actually like that.

I am not saying that none of the Bible writers themselves had any such primitive pictures as we have been considering. I am saying that we cannot take their statements as any kind of affirmation of the pictures, that is, the references to physical things are either conventional (much as ‘four corners of the earth’ would be for us) or poetic. And when they are poetic, they are an invitation to the audience to picture the referent as if it were such and such. In each case, we can successfully identify the referents and form the suitable picture in order to cooperate (or not) with the communication (p. 260).

the faithful are invited to affirm that the way Genesis 1-11 tells the story gives them the divinely approved way of picturing the events and that there are actual events that the pictures refer to (p. 296).

There is plenty more in the book. I won’t attempt to give away everything Collins says about how he interprets Genesis 1-11, such as where he lands on questions of the historicity of this or that particular detail. The book is primarily concerned with how we interpret texts such as Genesis 1-11, and I hope I have given you a flavour of the kinds of questions Collins thinks we should be asking, as people who aspire to read Genesis well.