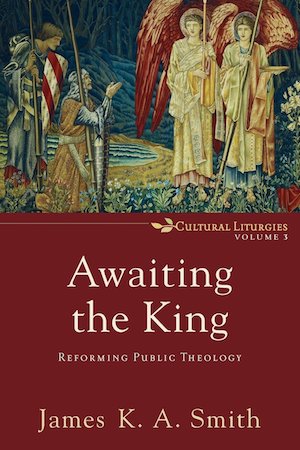 Awaiting the King (2017) is the final volume of James K. A. Smith’s Cultural Liturgies trilogy.

The first volume, Desiring the Kingdom: Worship, Worldview, and Cultural Formation (2009), outlines his basic thesis. Human beings are primarily lovers and only secondarily thinkers, so we are primarily shaped through formative practices, or ‘liturgies’, whether these are the liturgies of consumerism, or the liturgies of Christian worship. As such, it has a particular focus on education. I read that book back in 2013, and it had a deep impact on me: see my posts on How to become a better lover, Killing Us Softly: Advertising’s Image of Women, How to get a Christian university education, and Meeting God in the materiality of Christian worship.

The second volume, Imagining the Kingdom: How Worship Works (2013), which I haven’t read, presumably does what it says on the tin: examining how worship works, by means of the imagination, in shaping our longing for the Kingdom of God.

This third volume, as the subtitle suggests (‘Reforming Public Theology’), is about public theology, which is essentially a broader version of political theology (p. 11). Given the formative power of cultural liturgies, in the church and in public life, how should Christians understand and engage with the world at large?

Beyond that overarching theme, I think it would be fair to say that the book is somewhat lacking in structure. It is also highly dependent on the work of others, with whole chapters filled with quotes from a handful of key texts. This is intentional: one of Smith’s hopes for the book is that it will introduce people to Augustine’s City of God and to the writings of Oliver O’Donovan (p. xi). As the final instalment of the trilogy, there is also some tying up of loose ends, such as the question of why, if Christian worship is so deeply formative, so many people who participate in the church’s liturgical practices end up living in ways that are far from Christian (see below, on Chapter 6). However, I have still benefited enormously from reading this book.

First, then, to Augustine, whose City of God looms large over the Introduction, Chapter 1, and the Conclusion. Augustine would have us think in terms of two ‘cities’, the ‘heavenly’ and the ‘earthly’. But this shouldn’t be understood spatially: the two cities are not two different territories, or domains, or spheres, within the world. Rather, they are two competing ways of life, or ‘two kinds of love’ (p. 45). The ‘earthly city’ traces its origins to the fall, and is a misdirection of the created order (p. 48). In this ‘era’ of the saeculum, ‘between the cross and kingdom come’ (p. 32), ‘we find ourselves in the territory of a contested creation’ (p. 54). So ‘there is no dual citizenship for Augustine’ (p. 45): everyone lives in the same world, but our lives are fundamentally animated either by a love for things heavenly (if we are citizens of the heavenly city) or by a love for things earthly (if we are citizens of the earthly city).

In terms of political engagement, this means that we cannot, and should not, withdraw from public life, as if the political realm was not part of God’s good creation. But, as we do engage with wider society, we should not forget that there is a deep antithesis between the two cities. There is no sense in which the politics of the earthly city is neutral or harmless. We therefore need ‘a kind of holy ambivalence about our relationship to the political’ (p. 16). This is something we will have to contend with until the parousia. Hence, Awaiting the King (see pp. 11, 18).

Exploring what this means brings us to the second major figure in the book: Oliver O’Donovan, whose work forms the basis of three chapters, primarily through The Desire of the Nations (1996). First, Chapter 2 explores how the worship of Jesus as Lord shapes the church for political engagement in the world. Chapter 3, drawing also on The Ways of Judgment (2005), explores the ‘craters of the gospel’s impact on Western liberal democracies’ (p. 98). Much of what we take for granted in the West is actually the fruit of Christian influence on the public realm, such as the ideas of accountable government, liberty, human rights, and freedom of speech. (I suspect Tom Holland might concur.) Third, Chapter 5, drawing also on Resurrection and Moral Order (1994), cautions against political engagement on the basis of some kind of neutral ‘natural law’, which would supposedly do away with any need for Christian political engagement to be distinctively Christian. This is at least partly because ‘Appeals to nature depend on the illumination of special revelation’ (p. 156).

Two chapters remain. First, Chapter 4 explores the notion of pluralism, in conversation with Jonathan Chaplin. I would want to read Chaplin’s work for myself before deciding whether I think Smith’s critique is fair, but Smith’s basic point seems clear: that a pluralist society depends on the influence of the Christian gospel. Specifically, ‘the liberal state lacks the formative resources it needs to engender citizens who have the know-how to live well in pluralistic societies’ (p. 132).

Finally, Chapter 6 is something of an apologia for the whole series. Its subtitle, ‘Our “Godfather” Problem’, alludes to the climactic scenes of The Godfather during which Michael Corleone acts as godfather in a service of Christian baptism. ‘In dizzying array, we cut back and forth from the hushed rites inside the church to a series of brutal assassinations ordered by Michael Corleone’ (pp. 166-7). The ‘Godfather problem’ is this: if Smith is right that Christian worship is so deeply formative, then how can there be people like Michael Corleone, who participate in Christian worship, but seem utterly lacking in true Christian formation? Smith responds in five ways (pp. 201-7). First, the positive effects of Christian liturgies may be cancelled out by the equally strong ‘liturgies’ of the world. Second, Christian worship has its desired effect only within the context of a whole life of discipleship. Third, Christian liturgies may be ‘captured’ and subtly re-appropriated in service of some other goal. Fourth, the process of sanctification is gradual. And, fifth, worship is fundamentally about God, not about us.

Probably the main lesson I have taken from this book is that nothing other than the gospel of Jesus Christ provides the answer to the political problems that confront us today. So let us put our energy into evangelism and into the politically formative practices of Christian worship and discipleship.