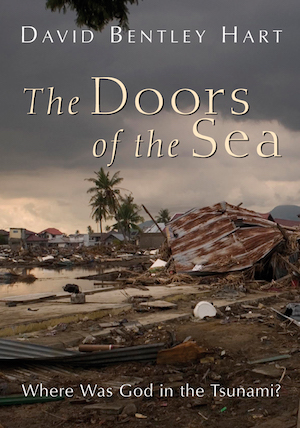 David Bentley Hart’s book from 2005, The Doors of the Sea: Where Was God in the Tsunami? is lucid, brief and profound. It amounts to a sustained attack on the idea that suffering has some kind of explanation. God has no need of evil in order to accomplish his purposes. God is being itself, the source of all being, and God is pure goodness. Evil, therefore, has no substance of its own; it is merely an absence of goodness. It cannot, therefore, serve any necessary purpose within God’s creation, even if ‘God can bring good from evil’ (p. 74).

So we cannot console ourselves, or others, when faced with the devastation of the 2004 Boxing Day tsunami (for example) with any ‘vacuous cant about the ultimate meaning or purpose residing in all that misery’ (p. 101). Hart gives the example of a physically strong man who lost four of his five children in the tsunami and broke down in tears when talking about his loss:

Only a moral cretin at that moment would have attempted to soothe his anguish by assuring him that his children had died as a result of God’s eternal, inscrutable, and righteous counsels, and that in fact their deaths had mysteriously served God’s purposes in history, and that all of this was completely necessary for God to accomplish his ultimate design in having created this world (pp. 99-100).

If evil has no ultimate purpose or meaning, what then is its source? This is to be found in the freedom that God grants to his creatures. Everything in creation depends on God for its existence, but it is nevertheless ‘genuinely other than God’ (p. 83). Creation is not simply a bare manifestation of the will of God. God permits creation its own freedom, without directly willing everything that happens within it. As Hart explains (and to give you a flavour of the style of the book):

For, unless the world is truly set apart from God and possesses a dependent but real liberty of its own analogous to the freedom of God, everything is merely a fragment of divine volition, and God is simply the totality of all that is and all that happens; there is no creation, but only an oddly pantheistic expression of God’s unadulterated power (p. 91).

So why do we live in a world with volcanoes and tsunamis? Although these are necessary for life on earth (p. 51), we live in a ‘fallen world’ (p. 66). Humanity was created as the boundary ‘between the physical and the spiritual realms, or as the priesthood of creation that unites earth to heaven’, and therefore, ‘in the fall of man, all of material existence was made subject to the dominion of death’ (p. 63). In our freedom, we have handed the cosmos over ‘to another master’ (p. 63), and now ‘the whole world lies in the power of the evil one’ (1 John 5:19; p. 66). So we are subject to ‘angelic and demonic “powers,” which are not able to defeat God’s transcendent and providential governance of all things, but which certainly are able to act against him within the limits of cosmic time’ (p. 65).

But when did this happen in time?

The fall of rational creation and the subjection of the cosmos to death is something that appears to us nowhere within the unbroken time of nature or history; … it belongs to another frame of time, another kind of time, one more real than the time of death (p. 102).

I’m not sure what this means. The ‘fall of man’ (p. 63), presumably, did happen within ‘cosmic time’. But ‘the subjection of the cosmos to death’, apparently, belongs to ‘another frame of time’. Does this mean that the fall of man took place within a world that was already fallen, and that had already been subjected to death? Is this why we have volcanoes and tsunamis? Hart does not make this clear.

Or might it have been possible for an unfallen humanity, equipped with the kind of divine power that Jesus exercised on earth, to have lived in a world that contained volcanoes and tsunamis, but to have been unharmed by them?

Much more could be said, of course. I haven’t touched on Hart’s universalism, for example (see pp. 88-92). Hart assumes a lot of knowledge on the part of the reader, much of which I did not possess until recently (via Simon Oliver’s Creation: A Guide for the Perplexed, primarily). He doesn’t provide a full account of natural disasters, but he does lay some valuable theological foundations upon which such an account might be built. I will be digesting this book for some time.