The word “Supper” is not a technical, theological or religious term, but is simply the designation of the ordinary evening meal. In the culture of the time this would have been the main meal of the day, not just a light snack before bedtime, which is how we are culturally attuned to hear the term. The “Lord’s Dinner” might be a more accurate rendition of what is meant. 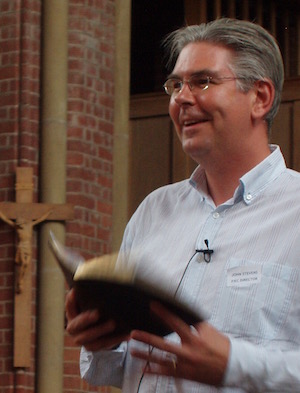 So writes John Stevens, National Director of the FIEC, in a timely, provocative and lengthy article in the spring edition of Affinity’s Foundations journal, entitled Not Reformed Enough: Critiquing Contemporary Practice of the Lord’s Supper.

But bread and wine don’t make much of a meal, do they?

1 Corinthians 11:17-34 indicates not just that the Lord’s Supper was celebrated in the context of a meal. Rather, it appears that the entire meal constituted the Lord’s Supper. Jesus words of institution are recorded in such a way that they bracket the entire meal enjoyed by the congregation. The bread is shared at the beginning of the meal, and the cup is then shared “after supper”. Participation in the Lord’s Supper provides opportunity for the physically hungry to be satiated, and for the over-indulgent to get drunk.

How does this compare with what goes on in most churches today?

It is striking that most contemporary practice of the Lord’s Supper does not involve a meal. In contrast we have taken the biblical sign of a communal meal, bracketed by the sharing of bread and cup in memory of Jesus death, and turned it into a mere token “sign of the sign”. It is deeply ironic that the Reformers, and those who have followed them, speak of the Lord’s Supper as a “meal” even when in reality it is nothing more than a tiny portion of bread and a merest sip of wine.

So if the Lord’s Supper is supposed to be a proper meal, what does that say about the tone of the meal? Should it be a sombre occasion?

[T]he Lord’s Supper is meant to be a joyful celebration of what Christ has done for us. This is suggested by the connection with the Passover. The Passover was commanded to be observed as a “commemoration” of God’s great rescue of his people from their slavery in Egypt. It was meant to be celebrated with “great rejoicing”. It was a feast and not a fast, a time for praising and thanking God for his deliverance, and for passing the story on to the next generations. If, as Ben Witherington observes, “Passover was meant to be the most joyful of meals, not the most sorrowful”, this ought to be even more so for the Lord’s Supper, which commemorates our far greater redemption from our eternal enemies of sin, death and Satan.

For a short period of time when I was Pastor of City Evangelical Church, Birmingham we celebrated the Lord’s Supper after our morning service in the context of a church lunch. We met in a school and were able to make use of the kitchens. We began our meal seated around tables with a hymn, a prayer of thanksgiving and the words of institution for the bread. We then shared bread before eating our lunch together. After we had eaten lunch we ended by sharing the cup. We spoke the words of institution and gave a prayer of thanksgiving. After we had all shared the cup we would sing a hymn that gave thanks to God for the salvation that we had received in Christ. In the end a change of venue and a shift towards different congregations in the morning and evening meant that we were unable to sustain this pattern. On reflection I think we lost something significant. I felt that we had come nearer to the practice of the early church, and were blessed in our mutual fellowship as a result. We avoided making too much, or too little, of the Lord’s Supper. It became both more ordinary and more precious. I miss it and would love to be able to recapture something like it again.

Worth reading the whole article. Much to ponder.

Update 7 May 2016: Robert Strivens makes a (worthwhile) response to John Stevens in the Autumn 2015 issue of Foundations, arguing ‘that John over-emphasises the horizontal aspects of the Supper at the expense of the vertical element by which believers together in the Supper come to Christ himself and partake of him by faith’.