I had this review published in the Winter 2013/2014 edition of Green Christian, the magazine of the Christian Ecology Link (CEL). It's now on their website, and reads as follows... 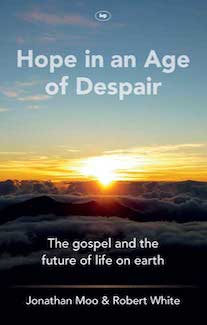 This book was written out of the conviction that “our view of the future can and does have a profound effect on how we engage with the present” (p.19). The authors worked together in Cambridge on a project entitled “Hope for Creation”, administered jointly by the Faraday Institute (of which White is now the director) and the Kirby Laing Institute for Christian Ethics (KLICE). White, Professor of Geophysics at the University of Cambridge, was the director of this project, with Moo as a postdoctoral researcher before he took up a teaching position in biblical studies at Whitworth College, Seattle, in 2010.

The first (and shorter) half of the book deals with the present environmental crisis. It is written with the not-quite-convinced reader in mind, and helpfully leaves the discussion of global climate change to a separate chapter, first exploring such topics as biodiversity, water, nitrogen, food and land use. They write in a way that is winsome, authoritative and persuasive, making it clear that “that there is in fact plenty of cause for concern” (p.15).

Their “task in the second half of this book is to reflect on just what difference it makes to how we respond to the environmental challenges facing us if we take seriously the picture of the future that Scripture paints for us” (p.17). The Christian doctrine of the future is often a subject of controversy, and “there is plenty of evidence that some versions of future expectation do in fact lead to present neglect” (p.90). Nonetheless, the authors tackle the subject head-on, refusing to “ignore what … Scripture says about the ways in which creation itself is caught up in the drama of fall and redemption”.

In looking at the biblical doctrine of the future and its implications for creation care, Moo and White focus on four key New Testament passages, devoting one chapter to each. First, “Romans 8 makes it clear that this very same creation that is groaning now has a future in God’s ultimate purposes” (p.123). Next, 2 Peter 3, rightly understood, speaks not of the “dissolution of the world into non-existence” (p.134), but of the catastrophic transformation it will undergo when evil and injustice are finally dealt with. Third, Jesus himself in Luke 12 exhorts us to be ready for the coming of the Son of Man, and in the light of that coming to live lives not of fear, but of love, stewardship and hope. Finally, in Revelation we get a glimpse of the renewal of all things. God’s good purposes for this world will most certainly be fulfilled. This promise acts as the strongest antidote to despair.

I was hoping for a reassuring promise that the environmental crisis will quickly be resolved. But no such easy answers are provided. “Our sure and certain hope in the resurrection and the new creation does not keep us from weeping while we yet live in a world of wounds. Only in the new heaven and the new earth will our tears be wiped away, once and for all, by God himself” (p.191f.).