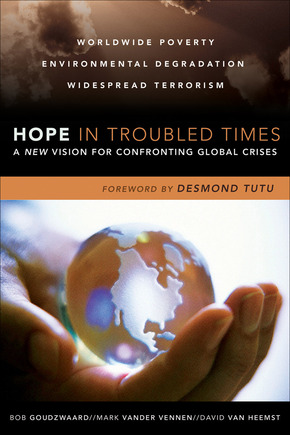 We live in troubled times. Worldwide poverty, environmental degradation, widespread terrorism: the problems are massive and potentially catastrophic. As we face these global crises, is it possible to react with hope rather than despair? Is disaster inevitable and beyond our control, or Is it possible to get under the surface of these issues and begin to see new possibilities for our world?

Hope in troubles times (2007) was written by Dutch professor and former MP Bob Goudzwaard, Canada-based writer and social worker Mark Vander Vennen, and US-based professor David Van Heemst. The bulk of the content comes from Goudzwaard, building on his 1984 book, Idols of our time. The main text (205 pages) is accessible to the general reader, while the notes (35 pages) make it suitable for academic readers too.

The authors' contention in the book is that we find ourselves in the grip of powerful modern ideologies. These ideologies first latch onto a worthy goal (such as prosperity in the face of extreme injustice and poverty, or security in the face of potential attack), then propose a means by which that goal can be reached (such as the operation of free markets, or weapons technology), and then seek to reshape the whole of reality in the service of those means. The means then function something like a traditional idol: we create something, we entrust ourselves to it, and then we find it seems to have a life of its own, demanding greater and greater sacrifices while the good things that the idol promised become more and more elusive.

[V]enerating a certain force or type of knowledge as something that by definition brings prosperity or security implies that in specific circumstances we may be prepared to place our lives under the control of such a power, a power that would not exist without our efforts. At the heart of that transfer of control may be a need for certainty, an urge to feel as though there is a power greater than us that can regulate our lives. It may be born out of fear that we have little or no control over our world. And for some today, following the dictates of the market, technology, or the state may offer that sense of security. But then the ultimate irony, the role reversal characteristic of idol worship, has been achieved: what we ourselves have created ends up controlling us. The instruments must be obeyed, even if they require sacrifices—such as damage to health, deterioration of the environment, the loss of privacy, the threat of unemployment, or the perilous undermining of peace. In principle, every ideology is able to summon its own tools or instruments, either forces or institutions, whose exacting demands elude scrutiny and critique (p.43-44).

[W]e live, to a greater or lesser extent, in the grip of a powerful, largely Western ideology: the ideology of a restless commitment to unlimited material progress and prosperity (p.93).

Obsessed by an end (rising material prosperity), we have off-loaded our responsibility and allowed various forces, means, and powers in our society (such as untrammeled economic expansion) to become gods who dictate their wills to us (p.28).

In addition, a remarkable sense of fear radiates from these [financial] markets, fear of what they might do to us. The predominant question today is, How do we behave as a corporation or as a nation so that our actions become acceptable in the eyes of the financial markets? The question in and of itself suggests that money and financial markets have taken on a life of their own: a feature of idolatry (p.97).

A remarkable table (p.158) shows how a blind adherence to this "market fundamentalism" has led to a host of undesirable outcomes, as a consequence of an obsession with those sectors of the economy that can increase in efficiency at the expense of those sectors of the economy that are "characterized by virtually fixed levels of productivity" (p.90). So the operation of the free market mechanism has led directly to "unemployment, environmental problems, stress … Increasing need for care; increasing inability to pay … Loss of home markets, increase of poverty" (p.158), and yet the only solution that seems available (particularly to the Coalition government in the UK!) is to sacrifice more and more to the free markets, in the hope that they will give us that prosperity that we long for.

The means take control. The strategy no longer holds the weapons in check. Instead, the progress of weapons technology determines the strategy (p.110).

Even when the accumulation of weapons ends up destroying the very freedom it was supposed to deliver, the answer is still to accumulate more weapons.

Absolute freedom requires absolute force to accomplish, secure, and guarantee that freedom. The end (freedom at all costs) justifies every possible means, including unprecedented force (such as unlimited military power, a profound curtailment of civil liberties, and the violation of international law). The requirements of that force gradually diminish, curtail, and ultimately destroy freedom (p.120).

The outcome is truly hideous.

"The subject matter of this book is hardly uplifting" (p.169), particularly when these ideologies are exacerbated by globalisation, or when they are seen to reinforce each other (as in the global arms trade) or to collide with each other (as in 9/11). What room is there for hope?

Perhaps the greatest opening for hope is simply the unmasking of the idols of our age. They are not autonomous powers beyond our control. We have put them in place, and it is within our power to dethrone them.

[T]he so-called end of our history is by no means in inescapable fate. Today's general feeling of insecurity is actually not a sign that the powers now dominating us are beyond our control. On the contrary, it is a sign that we have abdicated our human responsibility (p.170).

Drawing richly on biblical insights, the authors then sketch out some steps that could be taken towards "widening ways of economy, justice, and peace". They are optimistic that by "turning away from today's steps of despair" (p.178) and by taking even small steps towards hope, it would be possible to counter "today's ominous, devastating spirals of terror" (p.157) and to "launch an upward-moving spiral, one that lifts us from the depths that threaten to engulf us" (p.188).

As Archbishop Desmond Tutu says in his foreword to the book,

If apartheid can fall in South Africa, then ideologies of identity, materialism, and security can end too. God is dreaming of a world where all people, black and white, rich and poor, clever and not so clever, are drawn into one family, a world where all of us participate as agents in God's inexorable transfiguration of evil into good. How can we lose? (p.11)