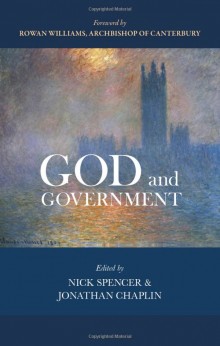 God and Government is an accessible, recent (2009) multi-author book, aimed at stimulating Christian thinking about political issues within the UK context. Recognizing that there are no simple answers, the book's aim is to put forward a set of principles, which can help to form political wisdom in the context of political practice.

There are eight chapters, framed by an introduction and conclusion by the editors (Nick Spencer and Jonathan Chaplin). The brief for each chapter was to respond to the same question: "what, according to Christian theology, is the proper function of government? What, in other words, should those Christians engaged with politics, in whatever capacity, be aiming to achieve through their engagement?" (p.3). The first four chapters focus more on principles, while the last four attempt to spell out the implications more concretely. Here's a summary of the chapters:

1. Nigel Wright, a baptist theologian, sets the ball rolling with his chapter on Government as an ambiguous power. Government is ambiguous: both good and bad, being simultaneously created, fallen, and open to redemption. It has important functions, "to maintain order and to punish wrongdoers" (p.27).

2. Julian Rivers, professor of law, then explores The nature and role of government in the Bible. Government has legitimate authority from God, but it is limited, both "by the existence of other human authorities, in particular, church, family and individual" (p.47) and "by the means at its disposal" (p.48), its power to coerce. Government should itself be under law, diffuse and accountable.

3. The chapter by Tom Wright, former bishop of Durham, is entitled Neither anarchy nor tyranny: Government and the New Testament. It is a call for believers to embrace God's alternative empire, recognizing that the Christian confession that "Jesus is Lord" is in direct opposition to the Roman confession that "Caesar is Lord". Jesus' lordship is the proclamation not just of a new lord, but of a new kind of lordship, shaped by Jesus' crucifixion.

4. The role of government in classical Christian political thought is the subject of the chapter by David McIlroy, a practising barrister. Government, according to this rich tradition, should be accountable, and it should be limited, having the twin aims of promoting the common good and executing just judgment.

5. Nicholas Townsend, lecturer in Christian ethics, then begins to flesh out these principles, in a chapter on Government and social infrastructure. Government should not attempt to implement the common good in its entirety, but should limit itself to providing that social infrastructure which is a prerequisite for the common good. In pursuing this, the role of government is both corrective (remedial) and directive (coordinating).

7. Social commentator Clifford Longley then looks at Government and the common good. The central principle underlying all policies should be a commitment to the common good, which is not the sum of each person's individual goods, but which is the good of society as a whole.

8. Government and equality is the theme for the final chapter by Andrew Bradstock, a professor in faith and politics. The Bible is committed to equality between all people, and this stands against the large and growing inequality in British society. Government has a role to play in narrowing the gap between rich and poor.

A few words from Jonathan Chaplin's conclusion will serve well as a summary:

[T]he book's … hope is that it will spur Christian [political] practitioners on as they seek to forge new, closer and more critical linkages between their theological convictions and their policy commitments—and so to manifest practical Christian political wisdom in ways that promote justice and the common good for a contemporary Britain crying out for much more of both (p.234).