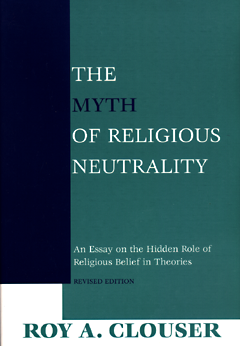 No, not at all! At least, not according to Roy Clouser, whose book, The Myth of Religious Neutrality: An Essay on the Hidden Role of Religious Belief in Theories I've just started to read.

His claim is that "religious belief has the single most decisive influence on everyone's understanding of the major issues of life ranging across the entire spectrum of human experience" and that "it exercises such influence upon all people independently of their conscious acceptance or rejection of the religious traditions with which they are acquainted" (p.1, emphasis added). Or, more precisely, "What will be demonstrated is that no abstract explanatory theory can fail to include or presuppose a religious belief" (p.4).

This is quite a bold claim, which first of all begs the question of what a "religious" belief is. That is the subject of the next chapter.

But for now, it is tempting for me, as a Christian, to assume the primary intent of the book is "to convert readers to belief in God, or to refute atheism, agnosticism, secular humanism, or any other 'ism'" (p.5). You see, Mr Atheist, you are just as religious as I am, etc. ... No, the main purpose of the book is for people like myself, to be persuaded