It’s quite embarrassing when you can’t recite the creed by heart but the congregation can!

But it’s understandable: unlike the congregation, you might regularly be reciting not one but four creeds, all subtly different: the Apostles’ Creed and the Nicene Creed, each taken from The Book of Common Prayer (BCP) and from Common Worship (CW).

I put the following table together a while ago, but I’ve just dusted it off for public consumption (PDF/Word). It has the four creeds in four columns, with the similarities and differences highlighted. 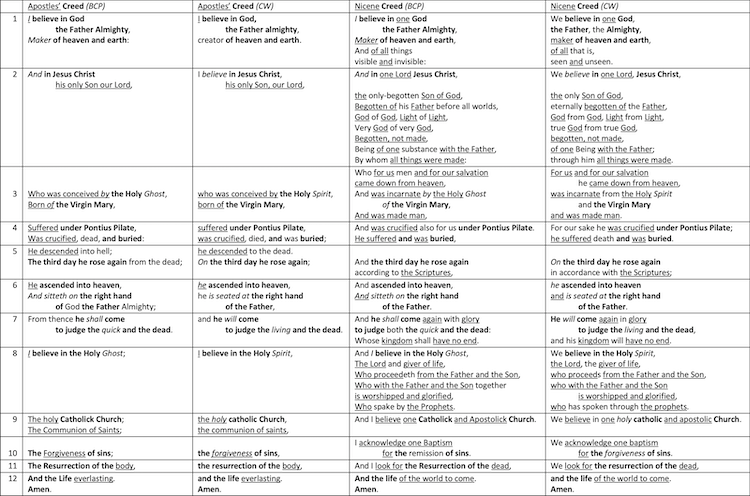 To explain (examples taken from the BCP Apostles’ Creed):

The rows show what is apparently ‘the traditional division into twelve articles’ for the Apostles’ Creed, spelling and punctuation are from the respective book, and non-indented line breaks are as in Common Worship (see p. 142 for the BCP Apostles’ Creed and p. 234 for the BCP Nicene Creed).

(Perhaps appropriately, last night I read a book chapter with the title, ‘Are vicars sad?’)