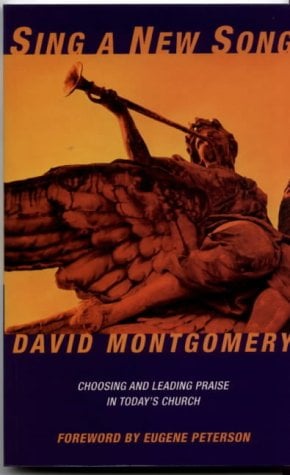 This book was doing the rounds in the Presbyterian circles in which I moved around the time of its publication (2000). One of the book’s strengths is also a weakness, given the passage of time, in that it includes in-depth discussion of songs and hymns that were cutting-edge in the 1990s. However, it is still relevant today, and I haven’t come across anything that does something similar with more recent material. (It is out of print, but second-hand copies are available.)

David Montgomery studied English, music and theology before entering church ministry, and went on to work for IFES in Ireland and across Europe.

There are essentially four sections to the book (p. xvii).

Looking at the biblical context, our worship must be acceptable to God, but the Bible gives us general principles rather than detailed instructions. On ‘psalms, hymns and spiritual songs’ – quoting Tom Wright – ‘these three terms indicate a variety and richness in Christian singing’ (p. 9). A plea for variety and richness is a constant theme of the book.

The historical context reminds us that much that was written in the past was of ‘transient value’ (p. 15), as is always the case.

What makes a good hymn or a good song? While ‘technical quality is not everything’, it is still worth considering (p. 116).

First, there is the poetry. This involves: structure, rhyme, repetition, imagery, metaphors and similes, alliteration, contrast, and theme. Montgomery laments the poor quality of many modern songs when viewed in this way:

Since the role of hymnody is to assist both the mind and heart to worship, the use of appropriate words is vital, and the music must at all times be a servant to the lyrics. …

In the later chapters we shall see how, in many of the latest contemporary worship-songs, the lyrics are almost incidental, and probably deliberately so, with words and phrases (often clichés) chosen for their sound rather than their meaning. …

This is not a revisitation of tired old arguments by an unreconstructed traditionalist, but a plea to recognise the importance of words in worship (pp. 36-37).

Second, there is the music. Factors that make a tune singable include: use of sequences and motifs, rhythmic variety, and musical climax.

Three sources of material are considered:

(1) Spring Harvest. Songs from Spring Harvest Praise 1996/7/8 are examined. There is a tendency for songs to be human-centred. Theologically, many core themes are almost completely neglected, with ‘glorification and exaltation’ being the dominant theme (p. 64). This leads to some pointed questions, which are still relevant today:

Are we in danger of concentrating on the ‘otherness’ of Jesus at the expense of his identification with us in the incarnation? Do we want the power of God, but not a share in the weakness and suffering of Christ? Can these ‘glory songs’ give the impression that we are worshipping a distant deity, rather than One who has become flesh? How exclusively Christian are some of the songs which speak only of adoring the ‘high and exalted one’, especially if they are sparse on the reasons for such adoration? (p. 66)

Acknowledging that there are ‘several very fine pieces among the Spring Harvest corpus’, Montgomery writes:

Unfortunately I have had to concentrate on the negative aspects of the contemporary worship-song, simply because so much of it is being sung and being accepted uncritically (p. 76).

(2) The Iona Community. The emphasis on incarnation provides a helpful balance to the Spring Harvest songs.

(3) Jubilate Hymns and Christopher Idle. Here, the emphasis on the atonement is helpful. Of particular merit is Idle’s hymn, ‘He stood before the court’.

It is important that we recognise that, at this moment in history, we have at our disposal a mine of good material. The compositions of previous centuries have been refined by time and we are left with gold which we discount to the detriment of ourselves and our churches. The compositions of the present, while yet unrefined, also contain gold among the dross (p. 90).

Various pieces of advice are given. For example:

I would love to read a book that does something similar, but in relation to songs and hymns that have been written since the turn of the century. Until then, this is still highly recommended. And it is short (around 150 pages).