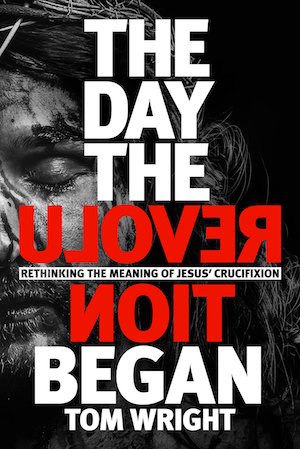 Jesus died for our sins … so that we, having been put right, could become part of God’s plan to put his whole world right. That is how the revolution works (22).

The Day the Revolution Began was, according to Tom Wright, the day on which Jesus died. As a result of Jesus’ death, the world is a different place. This book, from 2016, is Tom Wright’s attempt to make sense of that.

One of the most helpful things about the book is the way in which it situates the personal meaning of the cross within a larger story (e.g., 4-5, 79). In other words, Jesus’ death really does mean something for me and for my eternal salvation, but it has that meaning within the context of God’s purposes for the whole of his creation.

It is therefore to this larger story that we need to turn in order to make sense of the cross. This is significant when we begin to think in terms of abstractions and theories, because

the biblical view of atonement is more than the mere heaping up of motifs or even models. These are moments in a story; and it is the story itself—a real historical story both then and now—that matters (26).

[the four evangelists] are not simply telling us in descriptive language something that ‘really’ belongs as a dogmatic formula. It is the other way around. … The story is the reality … the actual historical story [is not] merely the backdrop against which a ‘supernatural’ or nonhistorical drama is acted out (223).

It is tempting to think that, while Jesus was being crucified, something else was happening on a different plane of reality: in other words, that Jesus was suffering physically on the cross, but, at the same time, spiritually, he was also bearing the punishment for my sins. But, for Wright, these are the same thing. There is one story, the historical story, the story of this creation, and it is only through this story that the cross begins to make sense.

God created humanity in order to be his image-bearers in the world: reflecting his rule into the world, and reflecting the praises of creation back to God. But humanity exchanged the worship of God for the worship of idols, and fell into sin as a consequence.

In the Bible, God’s plan to deal with sin, and so to break the power of idols and bring new creation to his world, is focused on the people of Israel. In the New Testament, this focus is narrowed to Israel’s representative, the Messiah. He stands in for Israel and so fulfills the divine plan to restore creation itself (68).

In Part 2, various threads in the Old Testament are seen to be pointing towards the cross. The cross turns out to be the answer to the problem of the failure of humanity (and Israel) to fulfil their vocation. This failure led to sin and to the consequences of sin: death (for humanity as a whole) and exile (for Israel specifically). What is needed is a new Passover, and a true end to the exile, with the return of the divine Presence. There are also hints in the Old Testament that this will come about through suffering, specifically through the suffering of the ‘servant’ of Isaiah.

Part 3 looks at the cross in the New Testament, first in the four gospels and Acts, and then in Paul.

The gospels, Wright points out, ‘are far more important than has usually been supposed for understanding the early Christian view of what Jesus’s death achieved’ (266). ‘Forgiveness of sins’ is understood not simply as a change of relationship between God and a sinner, but also as an event in space and time, in which sin was dealt with, ushering in a new era for God’s dealings with humanity. The threads of expectation from the Old Testament come together as Jesus brings about a new Passover through his crucifixion at the time of the Passover festival. The gospels as a whole lead up to that point, as Jesus embodies the return of the divine Presence to the world, foreshadowing in his life the victory over sin and evil that he would accomplish on the cross. Specifically, this comes about through Jesus being the representative substitute for his people, bearing their punishment on their behalf (210-223). Indeed, Jesus ‘must drain to the dregs the “cup of the wrath of God” so that his people won’t have to drink it’ (221).

Many of these themes are also found in Paul’s letters. We find, in Paul, ‘that the cross has liberated people from sin, so that they can be God-reflecting, image-bearing, working models of divine covenant faithfulness in action’. This comes about because ‘at the heart of the gospel is the innocent Jesus dying the death of the guilty’ (253).

The meatiest parts of the book are the two chapters on Romans. The first examines the letter as a whole, helpfully drawing attention to the theme of worship (misdirected in the idolatry of 1:18-26, and fulfilled in the praises of the nations being brought to God in 15:8-9), before focusing on chapters 5-8, and specifically on 8:3. This verse, for Wright, is the most explicit statement of ‘penal substitution’ in the New Testament. However,

The second chapter on Romans focuses on chapters 1-4, and specifically on 3:21-26, which is ‘arguably the beating heart of Romans 1-4 as a whole’ (295). Wright very helpfully situates this passage within its context, and argues that it addresses ‘the double problem of human sin and idolatry, on the one hand, and the divine faithfulness, on the other’ (314). The Greek word, hilastērion, is taken to refer to the covering of the ‘ark of the covenant’. To speak of Jesus being ‘put forth … as the place of mercy’ (hilastērion) is to speak of ‘the way in which true worship is being restored in the place of idolatry’ (316). The hilastērion is a place of cleansing and a place of meeting (333).

God put Jesus forth, Paul seems to be saying, as the place where heaven and earth overlapped, the place where the loving Presence of the one God and the faithful obedience of the true human being would meet and merge and be realized in space, time, and matter (340).

Significantly, however, if this is the correct interpretation, Romans 3:21-26 can no longer serve as a key proof-text for a particular formulation of ‘penal substitution’.

Finally, Part 4 brings us back to earth with the implications of Jesus’ death for mission:

Christian mission means implementing the victory that Jesus won on the cross. Everything else follows from this (358).

So far, so good. However, a few words of critique are in order.

First, the book is very repetitive. Words attributed to Mark Twain come to mind: ‘I didn’t have time to write a short letter, so I wrote a long one instead.’ This seems to be a common feature of Wright’s books. I’ve found Wright to be at his best when working to a strict constraint, such as in his lectures, or in his ‘For Everyone’ series of books on the New Testament.

Second, and perhaps related, it is a peculiar book. I wonder whether Wright, in a busy writing schedule, felt the need both to write a popular book on the cross, and to write a detailed study of the meaning of the cross in Romans, and hastily combined the two. At 420 pages, it is too much for a ‘popular’ book, especially as it includes a 57-page exposition of six verses of Romans. On the difference between his ‘popular’ and ‘scholarly’ books, Wright explains:

This is, of course, a ‘popular’ book in the sense that I have not provided the detailed scholarly apparatus … (418).

But this is very unfortunate, because

The heart of the present book is, however, substantially new, and represents a development and in some cases a significant revision of positions I have taken previously, for instance, in my commentary on Romans (418).

The book ends up neither being accessible for a popular audience, nor likely to prove persuasive for a scholarly audience.

Third, Wright’s rhetorical style makes constant use of a ‘foil’. On page after page, his view is contrasted with the (supposedly) ‘usual’ view, in which an angry God punishes Jesus so that we can go to heaven. I can’t see what this approach achieves. If his readers have been taught a simple doctrine of penal substitution which resembles this (supposedly) ‘usual’ view, then his style will be deeply off-putting. (Witness the way Wright is essentially written off and ignored in certain circles.) Surely those are the people who would most benefit from Wright’s emphasis on the larger story?

As this is a ‘popular’ book, Wright feels under no obligation to name the proponents of this (supposedly) ‘usual’ view. The closest he comes to doing so is when he quotes (without attribution) from the popular modern hymn, ‘In Christ alone’ (38). Two lines are quoted, the first of which is actually misquoted, with three mistakes, and the second of which is the infamous line, ‘The wrath of God was satisfied’. To Wright’s ears, ‘This makes it sound like hunger that is satisfied by a good meal’ (38). But, to biblically attuned ears, it might sound as though Jesus – in Wright’s words, as quoted above – ‘must drain to the dregs the “cup of the wrath of God” so that his people won’t have to drink it’ (221).

Fourth, and finally, I find myself reaching the end of the book and not quite having an answer to how the cross works. The book leads up to the epic chapter on Romans 3:21-26, but then pulls the rug away from under our feet, with the revelation that the passage isn’t about penal substitution after all. Also, for all the talk of the ‘powers’ losing their power when Jesus died (391), it is difficult to articulate how that actually happened, and what it actually means. A more complete and systematic treatment of the doctrinal questions is required, as Wright himself acknowledges (349-350). However, Wright does a good job of downplaying the importance of being able to ‘explain’ the cross, and I have found that his way of telling the bigger story ‘works’, perhaps better than abstract explanation.

These critical points are intended as ‘health warnings’. There is much of value in this book, but a certain amount of patience is required in order to benefit from it.