science has caused us to go back to the biblical account of the flood to see if we are reading it correctly … it has led us to read the account in conformity with the author’s intention (p. 176) 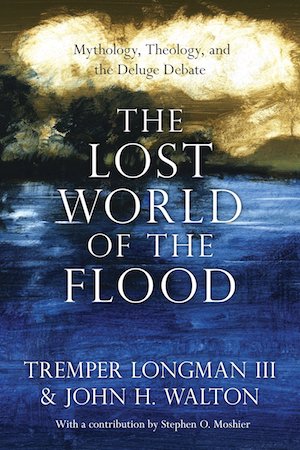 So write Tremper Longman and John Walton towards the end of their recent book, The Lost World of the Flood. As in the other Lost World books, all authored or co-authored by John Walton, the aim is take us into the ‘lost world’ of the ancient Near East, in order to shed light on a controversial issue related to the Bible. Of the five books in the series, this is the second I have read, and it is pretty good. (The first book, The Lost World of Genesis One, left me somewhat befuddled.)

What, then, are the theological messages of the flood narrative in Genesis? Two themes are highlighted.

First, it is ‘Part of a Sequence of Sin and Judgment Serving as Backstory for the Covenant’ (p. 100):

The term covenant (berit) appears for the first time in connection with Noah. … In this covenant, God commits himself to the continuance of the world and its inhabitants. … They don’t have to live in fear that God will periodically bring the creation to an end. …

Second, it is ‘Focused on the Issue of Divine Presence, the Establishment of Order, and How Order Is Undermined’ (p. 112). An ordered cosmos is one that is fit for the presence of God.

The flood is a reversal of creation, which began by God creating the world in a nonordered state. … The creation days of Genesis 1 picture the movement from nonorder to order, but God restores order after first returning the world to its precreation watery state (nonorder). God is doing a do-over. Though his act by his own admission does not eliminate disorder (= human sin [Gen 8:21]), it demonstrates his commitment to continue his order-bringing plan (Gen 8:22) (p. 46).

In both cases, the flood shows that God is still committed to bringing order and blessing to the world he has made, even in the face of human wickedness. And this finds its fulfilment through God’s covenant with Abraham, which begins in Genesis 12.

But if that is the theological purpose of this piece of ‘theological history’, then what about the history part? What actually happened?

This brings us to perhaps the most important part of the book, in which Longman and Walton explore the use of hyperbole in ancient narratives. Their conclusion is as follows:

If asked, Was the flood global? our answer would be, Yes, it is global in its impact and significance, yet we have no reason to think that its physical scope and range was global. Since the Bible uses the rhetoric of hyperbole to describe the flood, it does not claim that the flood was universal in its physical scope and range; it rather portrays it in universalistic terms for rhetorical effect (p. 179).

As another example of the Bible’s use of hyperbole, they draw attention to the book of Joshua. In Joshua 10, we read of the total destruction of the Canaanites:

So Joshua subdued the whole region, including the hill country, the Negev, the western foothills and the mountain slopes, together with all their kings. He left no survivors. He totally destroyed all who breathed, just as the Lord, the God of Israel, had commanded. Joshua subdued them from Kadesh Barnea to Gaza and from the whole region of Goshen to Gibeon. All these kings and their lands Joshua conquered in one campaign, because the Lord, the God of Israel, fought for Israel (Josh 10:40-42, NIV).

But, lo and behold, just three chapters later, those pesky Canaanites are back again:

When Joshua had grown old, the Lord said to him, ‘You are now very old, and there are still very large areas of land to be taken over.

What is going on here? Longman and Walton explain:

The author is intentionally using universalistic language and intends to convey, rhetorically, that the conquest was complete, but that did not correspond to the actual geographical scope of the conquest, only to the significance of the conquest. Thus it uses hyperbole to make a theological point (p. 32).

They approach the Genesis flood in the same way. This particular local flood, interpreted authoritatively by the biblical author, has significance for the whole world. So it is entirely appropriate to describe it in exaggerated terms, as a worldwide flood.

Longman and Walton are clear that there was a historical event behind the flood narrative. Their suggestion is that there was a particularly devastating flood in the distant past, which had embedded itself in the ‘cultural river’ of the ancient Near East, and which was reflected in various myths and stories of that region. So it was this flood,

which may well have rooted itself in human memory passed down through the centuries, even millennia, that could have been used as a vehicle by the author of Genesis to present a story that would talk about God’s judgment and his restoring order when it had degenerated (pp. 145-6).

Sadly, they don’t expand on this point, and it raises numerous questions. For example,

I don’t think these questions are necessarily insurmountable, but they are simply the things I’m left wondering about at the end of this very stimulating book.