The Thirty-nine ‘Articles of Religion’, which reached their final form in 1571, count as one of the ‘historic formularies’ (constitutional documents) of the Church of England. I’m going to be reading and blogging about them during Lent. But fear not: this is not the first of thirty-nine articles about them! My plan is to group them together, and to offer a brief summary and one or two reflections, perhaps over seven or eight blog posts.

UPDATE: here they are…

‘Not the Thirty-nine Articles’ would be fairly accurate as a description of my journey over the past few years. I don’t recall being directed to them during the process of exploring the possibility of training for ordained ministry (though they might have been mentioned in passing). Nor have they made more than a couple of appearances during my training in college (though recent changes to the Anglicanism modules at Cranmer Hall have given them a more prominent place). So why bother? Why treat them as more than a historical curiosity?

Primarily, it’s a matter of conscience. In just under four months I am due to make some solemn declarations, as part of my ordination, which make reference to the Thirty-nine Articles.

First, in the Declaration of Assent, which I will make prior to the ordination service, in regard to ‘the faith … to which the historic formularies of the Church of England bear witness’, I will ‘affirm [my] loyalty’ to it ‘as [my] inspiration and guidance’, and I will ‘declare my belief’ in it. While there might be a bit of wiggle-room here, I will be declaring my conviction that the Thirty-nine Articles ‘bear witness’ to the faith in which I believe.

Second, in the service for the Ordination of Deacons, I will be asked:

Do you believe the doctrine of the Christian faith as the Church of England has received it, and in your ministry will you expound and teach it?

But where may this doctrine be found? Is it a vague and meaningless term? Far from it. One of the first of the canons (rules) of the Church of England explains:

A 5 Of the doctrine of the Church of England

The doctrine of the Church of England is grounded in the Holy Scriptures, and in such teachings of the ancient Fathers and Councils of the Church as are agreeable to the said Scriptures.

In particular such doctrine is to be found in the Thirty-nine Articles of Religion, The Book of Common Prayer, and the Ordinal.

Although there might be a bit of wiggle-room, I will once again be making a solemn declaration about the Articles. In this case, I will be declaring that I ‘believe’ and will ‘expound and teach’ the doctrine which ‘is to be found in the Thirty-nine Articles of Religion’, etc.

I don’t know how I could make those declaration without both (1) having a good understanding of ‘the doctrine … of the Church of England as set forth in the Thirty-nine Articles of Religion’, etc. (which bishops ought to require of me), and (2) believing this doctrine to be true. Hence the current project. 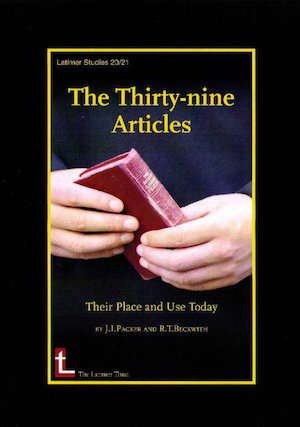 J. I. Packer, in a Latimer Study on The Thirty-nine Articles: Their Place and Use Today (1984), argues that the Articles continue to be valuable. He treats them as ‘the domestic creed of the Church of England’ (60), seeking to articulate the gospel in response to certain challenges of the time. In that sense, they are similar to the Apostles’ Creed, which articulated the gospel in response to docetism (the idea that Jesus only appeared to be human), and the Nicene Creed, which articulated the gospel in response to Arianism (the idea that Jesus was created by God). In the turbulent sixteenth century, it was felt necessary to articulate the gospel against what was seen as a ‘semi-Pelagian doctrine of salvation’ promoted by the Roman Catholic Church at the time (62), and also against the ‘eccentricities’ (42) of the Anabaptists. But the Articles, according to Packer, were intended to be as broad as possible, and to maintain catholicity, by articulating ‘the faith of the Fathers and the New Testament’ (64) in the face of the controversies of the time:

Though sharp-edged against the intolerable-seeming errors of Rome and the Anabaptists, and full and exact on all the central issues of the gospel, the Articles are nowhere narrower or more exclusive than they have to be, and their definitions were, it seems, always made as broad and comprehensive as was though consistent with theological safety (44).

As we work through the Articles, it will be worth considering whether they are indeed ‘nowhere narrower or more exclusive than they have to be’.

One complication is that the Articles, particularly towards the end, seem to speak of matters that are not about ‘the faith’, and hence might not be described as ‘doctrine’. But the declarations above speak only of the Articles in relation to the ‘doctrine’ contained in them, or in the witness they bear concerning ‘the faith’. (Between 1865 and 1968, one had to ‘assent to the Thirty-nine Articles of Religion’, and between 1604 and 1865, with one or two gaps and variations, one had to ‘subscribe to these Three Articles above mentioned, and to all Things that are contained in them’.) So Packer describes Articles 1-31 in terms of ‘five assertions’ that ‘sum up the thrust of the doctrinal articles’, adding that ‘32-39 deal with corollary questions of discipline and ethics’ (77-78). Similarly, R. T. Beckwith, later in the same Latimer Study, speaks of ‘The disciplinary Articles which conclude the 39’ (distinguishing them from ‘the doctrinal Articles’), and even admits that they ‘occasionally exalt probable opinions into certainties’ (96). It will therefore be necessary to dig a little in order to find the doctrinal content of the Articles, and not to be quite so concerned about the rest.

My primary travelling companion in what follows will be Gerald Bray, through his Latimer Trust book, The Faith We Confess: An Exposition of the Thirty-Nine Articles (2009).