Could God have ever looked at a world that included death or pain of any kind and pronounced it ‘very good’? And could an untamed and very good creation have included elements of ferocity and even predation? 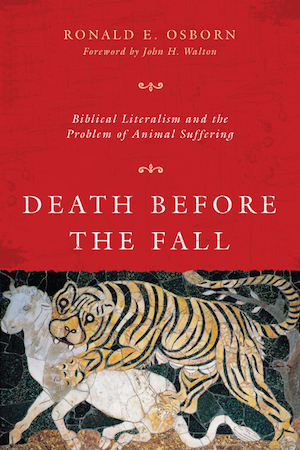 So asks Ronald Osborn in his 2014 book, Death Before the Fall: Biblical Literalism and the Problem of Animal Suffering (p. 33). The book focuses on ‘the topic of animal predation as a distinctive theodicy problem’, based on the conviction that ‘the suffering of animals may be the most severe theodicy dilemma of all given the fundamental questions it raises about God’s character as Creator’ (p. 19). This, he suggests, is the only decent theological reason why someone might hold to a ‘literalistic’ reading of Genesis.

[C]reationists pose a genuine theological objection to the idea of evolutionary creation: How could a God who created through a process that involved death and suffering from the beginning be described as both fully just and fully loving? What do evolutionary paradigms say about God’s character? (p. 74)

Osborn is an independent scholar and the author of several books, including Humanism and the Death of God: Searching for the Good After Darwin, Marx, and Nietzsche (Oxford University Press, 2017), which is (I presume) based on his PhD thesis (p. 64). He writes as an evolutionist and as a Seventh-day Adventist. As such, he writes from within a Christian denomination that is (it seems) strongly committed to creationism (young-life creationism, not young-earth creationism, to be specific). So if his exasperation with ‘literalism’ surfaces in the book (which it does), then it is the heartfelt pain of an insider, rather than the mocking scorn of an outsider. And that makes a big difference.

The book grew out of ‘a series of occasional articles’ in the Adventist magazine, Spectrum (p. 18). Recognising this helps to explain both the level of the book (popular, slightly academic), and also the absence of a clear thread holding it together. However, it doesn’t fully explain why, out of around 161 pages of text, around 95 pages are of no relevance to the topic of animal suffering. Nor does it explain the absence of a proper conclusion to pull things together. But there is a good deal that is very interesting in the rest of the book.

The Introduction shares something of the author’s experience, ‘growing up to missionary parents in Zimbabwe’ (p. 11). He recalls time spent in the Mana Pools wildlife preserve, during which he encountered the ‘beautiful carnage’ of fresh lion kill (p. 12).

All around us was a world that was deeply mysterious, untamed, dangerous, beautiful and good, waiting to be explored. And the danger was part of its goodness and beauty. … But the particular beauty of Africa’s wild places that were such an important part of my childhood were inextricably linked to cycles of birth and death, as well as suffering, ferocity and animal predation (p. 13).

It simply didn’t seem appropriate to him to describe such a world as ‘evil’ or ‘cursed’: ‘Mana Pools was very good’ (p. 13), but it ‘was also an untamed and even unremittingly harsh world’ (p. 14). But this is deeply problematic. How could a good God permit a world to exist in which the delicate balance of life requires ‘the harrowing suffering of innocent creatures’ (p. 14)?

As well as setting out the dilemma, the Introduction also introduces one of Osborn’s key insights: that this dilemma is also a problem for young-age creationists. (I devoted a separate post to this a few months ago.) The question he raises is that of ‘why God would inflict death and suffering on innocent creatures to punish sinful humans’ (p. 16, see also Chapter 10, particularly pp. 127, 134-9).

Part One: On Literalism, contains nine chapters with many interesting (if under-developed) thoughts about creationism, literalism and fundamentalism. Only the first of these chapters (and one page of the rest: p. 74) has any relevance to the problem of animal suffering. This first chapter, The Creation: A Plain Reading, has some very helpful insights. Creation is seen as ‘process as well as event’ (p. 25), with God co-opting his creatures as participants in the completing and filling-out of the created order. Creation is described as ‘very good’, which by no means suggests absolute perfection (p. 29). So Adam is told to ‘subdue’ the earth: a word suggesting ‘violent military conquest’ (p. 28). This relates to the distinction between the ‘sheltered environment’ inside the Garden, and the ‘inhospitable if not hostile territory’ outside the Garden (p. 35). ‘God wants Adam to increase the Garden’, and to continue ‘the story of God’s creative purposes for his world’ (p. 31).

The original creation is therefore deeply ambiguous. It is as God intended it to be, but not as God intended it to remain. Later in the book, we find the God of Job seemingly delighting in the ‘ferocity of the animal kingdom’ (p. 153). But we also find Isaiah (11:1-9) envisioning ‘a future peaceable kingdom’, and thus ‘anticipating a final transformation of the creation’ (p. 154).

What to do with this ambiguity is something that leads Osborn in various directions, as can be seen in Part Two: On Animal Suffering. Chapter 10 has more on the origins of predation, and the dilemma this poses, even to creationists. Then the following three chapters introduce three different ways of dealing with the problem of animal suffering.

Richard Middleton takes Osborn to task on this last point, highlighting the need to distinguish between creation and redemption, ‘Otherwise creation and fall are indistinguishable, and God is not a good creator’. I share Middleton’s verdict on the book as a whole:

In the end, Osborn’s book is a strange tissue of great insights and contradictory proposals. Should we accept the testimony of Job (and the psalms) that God views animal predation as good? Or do we go with our instincts that this is all ‘natural evil’ requiring redemption?

My inclination is to side with Job on this point, and to see a world containing animal predation as indeed being good, but only for the time being. God’s ultimate purposes are for the ‘very good’ world he created to be ‘filled with the knowledge of the Lord’, at which time (God declares), ‘They will neither harm nor destroy on all my holy mountain’ (Isaiah 11:9).