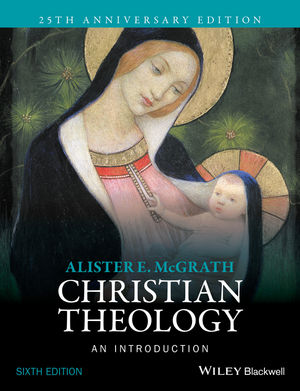 Theology is basically the systematic study of the fundamental ideas of the Christian faith.

So writes Alister McGrath in his textbook, Christian Theology: An Introduction (p. 85).

But if ‘the fundamental ideas of the Christian faith’ are derived at least primarily from the Bible, why is there so little direct engagement with the Bible in this book?

The answer, I think, lies in its nature as an introduction.

Ours is not the first generation to undertake a systematic study of the ideas that emerge from reading the Bible. But so often we live as if it was. In Christian circles, we read the Bible itself, we listen to sermons, and we read the occasional book by a contemporary Christian author. Even if we dig a bit deeper, it is invariably to recent commentaries and recent books about Christian doctrine that we turn. But our prevailing modes of Christian living and thinking have been deeply influenced by the events of the twentieth century, and by the materialism, consumerism and individualism of our present culture. Looking back a bit further, the questions we ask as a culture have been in the air since the eighteenth century and the Enlightenment. Our Christian traditions owe a great deal to the ‘Age of Reformation’ of the sixteenth and seventeenth centuries. And that period was itself profoundly shaped by its engagement with Scripture, in conversation with early and medieval Christian thinkers. We desperately need to be reading the Bible in dialogue with those who have gone before us, in order to get something of an outside perspective on our own context.

But how are we even to begin to engage with the vast and mysterious world of theology, as practised through Christian history?

The first step – and only the first step – is for someone to introduce us to this unfamiliar world. That is the role of Alister McGrath’s book, and it fulfils this role remarkably well. Now in its sixth edition, with 25 years of use and refinement, it is a tried and tested comprehensive introduction to the subject. The main text is remarkably concise (450 pages or so), assumes no significant prior knowledge, and provides an overview of the major periods of theology, the sources and methods of theology, and then the substance of theology. (There are even some videos introducing each chapter.) The aim throughout is to introduce us to the major conversations that have taken place within theology over the ages – and to go no further: McGrath makes no attempt to enable us to reach definitive conclusions on the questions raised within the book.

So, having read this book, the next step would be to enter these conversations more directly, by reading the writings of the theologians to whom we have been introduced. Again, where to start? This is where the companion volume comes in handy: McGrath’s The Christian Theology Reader. Within around 550 pages, this contains a few hundred short readings from (basically) all the major figures in Christian theology, with brief but helpful introductions and reflections by Alister McGrath himself. I’ve been working through this book too, and I’ve found it immensely rewarding not only to have been told about these great figures in Christian theology via McGrath’s Introduction, but actually to have read some of their writings for myself.

Having said all this, I do not think that McGrath’s Introduction should be anyone’s primary reference book on theology. Given its nature as an introduction, and as an introduction to theology as articulated by theologians, it will not give you more than a few clues as to what the Bible says about any theological question. At most, it will tell you that AN Other argued that the Bible teaches X because of verses such as Y and Z. So I wouldn’t recommend reading McGrath’s books without first getting a decent grounding in systematic theology elsewhere. If you start reading McGrath’s Introduction without first having some idea about what you believe (about Jesus, sin, salvation, etc.), then you won’t have reached any well-grounded conclusions by the time you reach the end.

(It’s worth being aware that McGrath has written shorter equivalents to both of these books: Theology: The Basics, and Theology: The Basic Readings. However, they are not a lot cheaper, and if the aim is to equip you to read theological works for yourself, then I would be surprised if a smaller book would necessarily do the job. The longer Introduction is already very concise, and the longer Reader can be treated as a library anyway.)