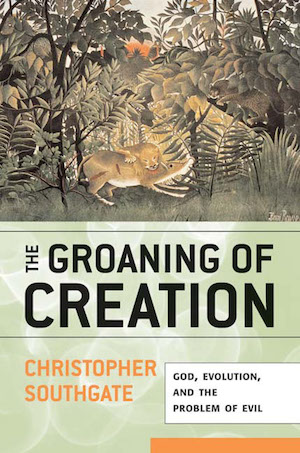 I’m going to be engaging this term with Christopher Southgate’s book, The Groaning of Creation. It’s a wide-ranging discussion of some massive issues, interacting extensively with other writers. So it’s not easy to summarise. But I will attempt to do so anyway.

‘Above all [the book] is an exploration in theodicy’ (p. x), evolutionary theodicy, to be specific. The evolutionary process involves the painful suffering of countless individual creatures, and the futile termination of the vast majority of species in extinction. How could a God who is responsible for this possibly be described as good?

One answer is to claim that there is no problem to be explained. But it is difficult to deny that animal suffering is real. Nor can it easily be denied that the loss of 98% of all species that have ever existed is a genuine loss.

Another answer is to blame the disvalues in creation on some act of wilful rebellion, whether human or angelic, and to ascribe to God only the values in creation. But this is to ignore how evolution works: it is precisely the suffering and futility described above that are the driving forces of evolution. According to evolution, is the disvalues of predation and extinction that have brought about the values of the complex and beautiful forms of life that we see around us, including humanity itself.

There are two key aspects to Southgate’s approach.

First, he argues that this was the ‘only way’ (or at least the ‘best way’) in which God could have created the world we see around us. This claim appears to rest on certain assumptions about how God might or might not interact with the world (assumptions which, perhaps, are not made as explicit as they might have been). This goes part of the way to exonerating God, but not far enough. What of the innocent victims of the evolutionary process?

This leads us to the second key aspect, which is the proposal that there will be some kind of resurrection life for these creatures, in which they will be given the opportunity to experience the fulfilment they were previously denied.

The great turning point of history, for Southgate, between the evolutionary ‘groaning’ of creation and its eschatological hope, is the Cross of Christ. The Cross is ‘the moment of God’s taking ultimate responsibility for the pain of creation’ and, with the Resurrection, the Cross also serves ‘to inaugurate the transformation of creation’ (p. 16).

What, then, is the role of humanity? We are now able to participate with God, to a small extent, in the ‘healing of the evolutionary process’ (p. 16). God subjected the creation to the frustration of the evolutionary process, in hope that the creation’s groaning might bring humanity into existence, so that humanity, redeemed by Christ, might share with Christ in bringing about the liberation of the whole creation (see Romans 8:19-22). Considering the evolutionary process to have served its purpose, Southgate writes, ‘I regard this as the eschatological phase of history, in which humans should be looking to their own liberation and to the relief of creation’s groaning’ (p. 126).

What does this mean in practice? The example Southgate gives is the role humanity should seek to play in protecting species from extinction, whether that extinction would be through human actions, or by ‘natural’ causes. In this ‘penultimate’ phase of history, such actions would serve as a sign of the future hope for the whole creation.

There is plenty here to get one’s teeth into (in a non-predatory way!). The main question I will be exploring is whether we can safely dispense with the Fall. Can we really understand God as creating such an ambiguous world, which is both good and groaning from the outset, rather than a wholly good world, which is subsequently corrupted by sin?