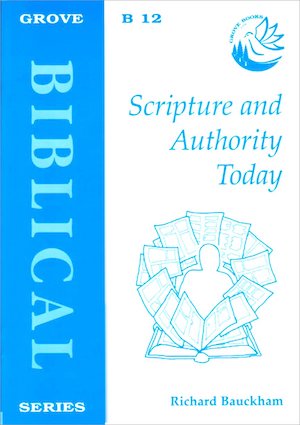 ‘Authority is not a concept which has fared well in the modern period,’ writes Richard Bauckham in his 1999 Grove Booklet, Scripture and Authority Today (p. 5). This is the case whether authority is viewed from a modernist or a postmodernist perspective.

Modernism accepts authority only when it is empirically verifiable and universally accessible. What does this mean for the Bible? ‘The crux of the problem of biblical authority in the context of modernism is the modernist prejudice against the particular and in favour of universal reason’ (p. 7). As an authority in itself, the Bible is ruled out. The most that it can be permitted to do, within modernism, is to help us to discover the historical Jesus, and to proclaim universal moral principles.

Postmodernism pulls the rug out from under the feet of modernism, and declares that ‘Enlightenment [modernist] thought is precisely a particular tradition of thought, like any other’ (p. 8). Postmodernism values the particular above the universal. Does this mean it is more open to biblical authority? Not necessarily.

Postmodernism represents a radical reaction against universal reason in favour of the particular. In that sense, it may look more friendly to the biblical tradition. But postmodern relativism favours the particular only by reducing all truth claims to preference (p. 9).

In any case, the Bible is both particular and universal. It describes particular events, but these events are the central elements of a universal story – a metanarrative – which describes the whole of reality. The problem with metanarratives, from a postmodern perspective, is that they are instruments by which the powerful exercise control.

What then of the biblical metanarrative? Is it just another attempt to oppress and to dominate? No, says Bauckham:

the biblical metanarrative offers not another legitimation of domination, but a genuine alternative. This metanarrative, by placing the future in God’s hands, liberates us from the need for mastery or control, restoring to us a properly human way of living in relationship with the rest of reality, neither subjecting it to our will nor constructing it at will. This depends on recognizing the kind of authority the metanarrative attributes to God as the authority of grace (p. 13).

Having defended the idea of biblical authority, the second half of the booklet looks at how we might receive this authority. Again Bauckham critiques modern and postmodern approaches, before describing an alternative.

A modern approach to the Bible, like a modern approach to the world, seeks ‘to master and to control the text’ (p. 21). The aim is to discern ‘the one and only original meaning of the text’ (p. 20). But this approach has failed. No consensus has been achieved, and ‘very often the more precisely the meaning of the text for its original readers in their precise historical context is specified, the less relevance the text appears to have for any other readers’ (p. 21).

There is a striking similarity between modern and postmodern approaches:

In neither case can the text itself speak with authority to a contemporary context (p. 21).

How then can Scripture speak with authority today?

For this to be seen as possible, we must recognize that meaning does not simply reside in the text (as it does for modernist reading) nor is it simply created by readers (as it is in postmodernist reading). It happens in interaction between the text itself and its readers (p. 21).

As we read the biblical text, conscious of our contemporary concerns, but with an attentive ear, we encounter God’s word afresh, and we hear God speaking into our context.

For the attentive listener, the Bible’s authoritative voice does not come only from the past, but is a living voice in the present calling us into the future (p. 23).

Take up and read!