The great prophets of Israel prophesied at a time when the world as they knew it was collapsing. As the world as we know it begins to collapse, do we need a revival of prophetic preaching? 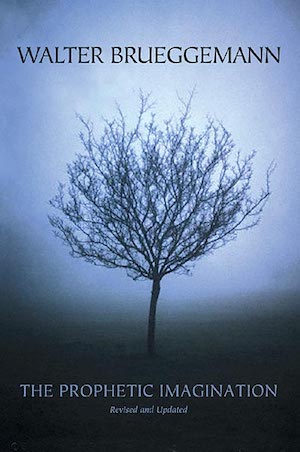 The prophetic task is not usually concerned with predicting the future. Nor does it usually involve direct confrontation with the world. But it always involves giving God’s people a vision of a different world order. The present order of things is dying, and we need our hearts to be captivated by a vision of the coming age: the kingdom of God. This is the argument made by renowned Old Testament scholar Walter Brueggemann in his influential (and short!) book from 1978 (revised in 2001), The Prophetic Imagination. In his own summary,

I suggest that the dominant culture, now and in every time, is grossly uncritical, cannot tolerate serious and fundamental criticism, and will go to great lengths to stop it. Conversely, the dominant culture is a wearied culture, nearly unable to be seriously energized to new promises from God (p. 4).

First, the prophetic preacher will seek to criticise the dominant culture. This is done through ‘anguish and not anger’ (p. 81), following the example of Jeremiah, in order to penetrate the culture’s numbness. Only when we are able to grieve in the face of the deathliness of the culture around us will we be free to receive the promise of something new. ‘Blessed are you that weep now, for you shall laugh’ (Lk 6:21, p. 118).

Second, the prophetic preacher will seek to energise with a vision of God’s promises for the future. This is a matter of ‘hope and not optimism’ (p. 101), relying on God’s sovereign and surprising intervention. With our imaginations shaped by visions such as those in Isaiah 40-55, despair turns to amazement, joy, and praise.

The end of the world is nigh! Perhaps not the final end. But just as every imperial reality in the past has fallen, however unshakeable it may have seen at the time, so the empire that we live in will also come to an end. I don’t know when that will be. Perhaps soon? Perhaps in stages? Perhaps it has already begun? But I’m sure it will happen.

The problem is that, as Christians in the West, we don’t want it to end. We actually rather like – or even love – the empire, and all that it gives us: material prosperity, individual autonomy, pleasure, security. And when God’s judgment falls on this Western empire, as it surely will, it is right that we should lament and grieve at its downfall. But that’s a process we need to begin now, before we are forced to choose which we genuinely love: the empire of the West, or the empire of God.

So be it, Lord; thy throne shall never,
like earth’s proud empires, pass away;
thy kingdom stands, and grows for ever,
till all thy creatures own thy sway.