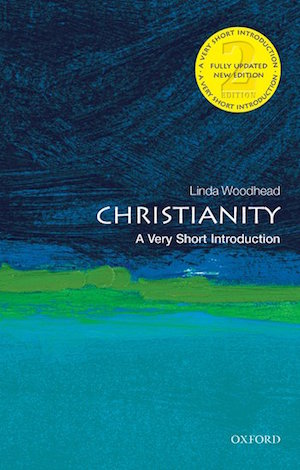 ‘Very Short Introductions,’ the books themselves tell us, ‘are for anyone wanting a stimulating and accessible way in to a new subject.’ There are now well over 400 titles in the series, covering ‘a wide variety of topics in every discipline’. I have read several ‘VSIs’, and have found them to be a very effective way of getting a brief overview of a new subject from an expert’s perspective.

Unsurprisingly, the series contains many titles related to religion, with 70 currently listed on the VSI website. There are volumes on all of the major world religions, as well as on specific topics within and across the religions. On Christianity these include titles such as Theology, The Bible, Jesus, Paul, Augustine, Christian Art, The Crusades, Anglicanism, Fundamentalism, The Quakers and Catholicism. The volume on Christianity was first published in 2004, with a completely revised second edition released in 2014.

Since 2006, Linda Woodhead has been Professor of Sociology of Religion at Lancaster University. She has written widely on the role of religion in contemporary society, and is prominent in public discourse about these topics. The book is clearly and engagingly written, and draws on scholarship from a wide range of disciplines.

The approach taken in the book is to distinguish three main types of Christianity, and to trace out their development through church history (2). Drawing on a scheme developed by Ernst Troeltsch (1865–1923), these types are described as Church, biblical and mystical Christianity (57). The difference between the three lies primarily in ‘how they understand and embody authority and power’ (57):

I found this distinction to be enormously helpful as a framework for reflecting on the history of the church.

If the ‘deeply divided’ (113) nature of Christianity extends to divisions over how its history should be articulated, there are no hints of those divisions in this book. Instead, one particular perspective is presented (from a position of authority) as the only perspective.

However, taken as a succinct articulation of a liberal/mystical perspective on church history, it is difficult to imagine how a better book could be written. For those (such as myself) who do not come from this tradition, it provides an invaluable and eye-opening introduction. In what follows, I will seek to summarise and respond to the main elements of this perspective, taking each of the three main types of Christianity in turn.

First, Church Christianity is associated with institutions, structures, clergy and sacraments. The book contains a powerful and valuable critique of Church Christianity, which I hope even its most ardent proponents would be willing to accept. There is no doubt that the church has often found itself far too close to imperial power: receiving its patronage and reflecting its oppressive character. But is it the case that all forms of structure and authority are oppressive by nature?

One of the hindrances to oppression in the West is, in fact, political power. The institutions in our society that are committed to human rights and the rule of law frequently use their authority not to oppress, but to prevent exploitation, to promote equality, and to empower the marginalised.

Can the same not also be true within the church? Jesus himself insisted on servant leadership in the church, based on his own model:

You know that among the Gentiles those whom they recognize as their rulers lord it over them, and their great ones are tyrants over them. But it is not so among you; but whoever wishes to become great among you must be your servant, and whoever wishes to be first among you must be slave of all. For the Son of Man came not to be served but to serve, and to give his life a ransom for many (Mk 10.42–45, all quotations from the NRSV).

The early leaders of the church are described in the New Testament as being like shepherds. This image contains within it an inversion of oppressive power, because shepherds exist for the sake of the sheep (not vice versa), and their duty is to feed the flock, and to be willing to lay down their lives in order to protect the flock from harm. The following words of Paul have clearly not been taken to heart at many times in church history:

Keep watch over yourselves and over all the flock, of which the Holy Spirit has made you overseers, to shepherd the church of God that he obtained with the blood of his own Son. I know that after I have gone, savage wolves will come in among you, not sparing the flock (Acts 20.28–29).

The institutions, structures and clergy of the church exist not to oppress and exploit the laity, but to protect and empower them.

Second, biblical Christianity, which emerged in the 16th century (113), is concerned with the authority of the Bible. In its purest forms, this is to be associated not with the Lutheran and Presbyterian churches of the ‘magisterial Reformation’, which are still reckoned to belong to Church Christianity, but with the churches of the ‘radical Reformation’, such as the Anabaptist, Baptist, Independent and Congregational churches (68). Attention is drawn to the strictness of the conformity to God’s Word in biblical Christianity (and its consequent proneness to schism), and to its tendency to shun ‘the world’ (68–70).

These observations are valid, but not inherent in all views of biblical authority. The schismatic tendencies can be ameliorated by the kind of concern for unity exhibited by Church Christianity, while the desire to flee ‘the world’ can be addressed both by the kind of global perspective characteristic of Church Christianity, and by a closer look at scripture, which has a much more affirming and positive vision for the role of the church in the world (see the writings of NT Wright in particular).

The more significant problem with biblical Christianity is that it is simply untenable, if the history of early Christianity presented in the book is true. If there were indeed ‘many churches and many gospels’, and if it was only in the 4th century that Christian leaders used their state-sponsored power to ensure that ‘one version of Christianity came to establish itself as the authoritative, “orthodox”, and “catholic” (universal) form’, then Jesus is indeed an ‘elusive figure’ (5–7), and it cannot be claimed that the canonical gospels give us access to the historical Jesus.

It will be sufficient here to cast doubt on this account of things, and to note that there are serious and reputable scholars (such as Richard Bauckham – author of Jesus: A Very Short Introduction – and NT Wright) who maintain that the canonical gospels have a historical reliability that far exceeds that of the apocryphal gospels.

Third, there is clearly much of value in mystical Christianity, which focuses on the work of the Holy Spirit in the lives of individual Christians. The Spirit is indeed ‘a potentially dangerous and uncontrollable element, especially for church authorities’ (35), and has inspired many of the great movements of renewal and reform in church history.

But can this go too far? Mention is made of evil spirits, which, like the Holy Spirit, can ‘overwhelm and possess human beings’ (34). But, without any other sources of authority, how is one to ‘test the spirits to see whether they are from God’ (1 Jn 4.1)? No examples are given of cases where this ‘mystical tendency’ has led people in unhelpful directions, and even the notorious Münster Rebellion is presented in a positive light – only to be ‘crushed’ by ‘violent opposition’ through the ‘combined forces of Church and State’ (85).

An exclusively mystical form of Christian leaves one vulnerable to simply adopting the spirit of the age uncritically. In contrast, although evangelicalism was clearly influenced by mystical Christianity in its emphasis on personal piety (102), it was not their personal spiritual experiences alone that led evangelicals to reject the spirit of the age and to promote ‘social reforms, including the abolition of slavery’ (103). Rather, such action was motivated by their belief that the Bible teaches that all human beings are made in God’s image and are equally valuable.

Could the same criticism be levelled against those Christians who adopt the spirit of our own age uncritically? Is there nothing harmful about our culture’s obsession with gender and sexuality, for example – a recurrent theme throughout the book?

There are occasional hints that the three types of Christianity can be combined in a healthy way. Methodism is said to have ‘combined Church, biblical and mystical elements’ (86) and is described in positive terms (102). Finally, the conclusion states that each of the three main types ‘burnishes one facet of the faith brighter than others’ (112). It is difficult to find expression in the book of those ‘facets of the faith’ displayed by Church Christianity or biblical Christianity. I hope I have begun to do that in my comments above. A healthy church, it seems to me, will seek to combine these three forms of Christianity in a multifaceted harmony.