What follows is the text of a short talk I gave as part of my interviews for the Church of England (BAP). I’ve given it a title, but I haven’t otherwise altered it. So if it doesn’t quite read like a blog post, you know why…

Now I’m sure you’re all obsessed with rugby … perhaps! But even if you’re not, I’m sure you’ll agree with me that there’s nothing quite like a stadium full of rugby fans singing at the top of their voices, ‘Swing low, sweet chariot’. There’s something about singing together that forms and binds a community.

Priests in the Church of England are called to lead God’s people in worship. And they can have an enormous influence over the way in which congregations sing. As they encourage the gifts of others, they can help congregations to sing in a way that binds the church community together and strengthens our faith in God. But the irony is that music is so often a cause of division. 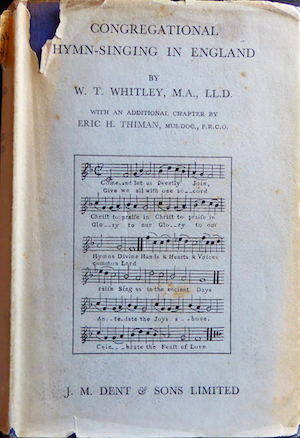 Years ago my grandfather gave me a pile of books about music. And one of them was this book from 1933: ‘Congregational hymn-singing in England’, by W. T. Whitley, who was the joint editor of the Baptist Church Hymnal.

I’m sure we’re all familiar with contemporary discussions about music and worship. But it’s really fascinating to step back into the past and to listen in on their conversations. I don’t think I’d appreciated that prior to the nineteenth century, congregations in the Church of England basically didn’t sing hymns.1 They sang metrical psalms. And I don’t think I’d appreciated how strong the tradition of metrical psalm singing was in the Church of England. Very few of these have survived; one example would be ‘All people that on earth do dwell’, which is a metrical version of Psalm 100.

And if you thought that it was only today’s congregations that are resistant to change, there was enormous opposition in many churches in the nineteenth century to the introduction of that new-fangled instrument, the organ!2

There’s a chapter at the end of the book by a different author3 talking about recent tendencies in congregational singing. It’s interesting to read what he says about the effect the surrounding culture was having on congregational singing. He picks up on two things. One is that children were having singing lessons in school. And this meant that church congregations were singing better. The other thing is that people were hearing more music, because of new technology, such as the radio and gramophone records. And this meant their musical tastes were becoming more refined.

And that made me think of today and our culture. We’re so used to listening to music. And this is really different to a hundred or two hundred years ago. Back then, if people wanted there to be music, most of the time they had to make it themselves. So people would be singing at home or in the factory or in the field. Singing was something people did together. But now, if we sing at all, we tend to sing along to things. We sing along to music in the kitchen or in the car, where no one can hear us, or we go to a concert and we either listen to the music, or we sing along but the music is so loud that we can’t hear our own voices.

So it seems that in our culture, except for rugby matches or community choirs, we’ve lost the joy of singing together.

And that’s affected our churches too. In all different traditions, people aspire towards the situation where they’re basically singing along to what’s going on up there. You either have a traditional choir, where anyone who has half a voice is way up there, and those who are left just mumble along. Or you have a worship band, where all the sound is coming through the PA system, and the congregation is just singing along inaudibly.

We’re so used to listening to exceptionally good music, that we don’t really like the idea of just a few ordinary people singing together.

But what I’d love to see in our churches is a sense that we’re not only interested in having fantastic music up there with us just singing along. But I’d love to see a greater value placed on the congregation’s singing. And I think that if we’re able to do that, we’ll see church communities bound together more strongly, and we’ll see people growing in their love for one another and for God.

We read in Colossians 3:16, ‘Let the message of Christ dwell among you richly as you teach and admonish one another with all wisdom through psalms, hymns, and songs from the Spirit, singing to God with gratitude in your hearts’ (NIV).