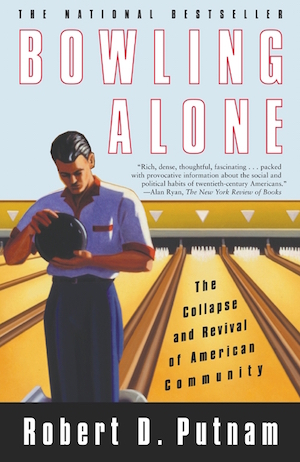 Any who are concerned about the sharp decline in “social capital” over recent decades would do well to read Harvard professor Robert Putnam’s 2000 classic, Bowling Alone: The Collapse and Revival of American Community. I’ll attempt to give you a flavour of the book here…

After the introduction, Section II surveys an extraordinary amount of evidence covering a remarkably diverse set of trends:

Section III asks, “Why?” What are the causes of this civic decline? Pressures of time and money? This might account for perhaps 10%. Mobility and sprawl? Again, another 10%. Technology and mass media? This might account for 25%, particularly as a result of television. This is partly because “Television privatizes leisure time” (p. 236), but also because “Another probable effect of television (not just programming, but also the associated advertising) is its encouragement of materialist values” (p. 245). But the biggest cause of civic decline, Putnam argues, is generational change, as one generation dies off and another takes its place.

But what could explain such a difference between the generations? Strikingly, but not particularly surprisingly, the answer seems to be World War II, which served as a strong stimulus to civic and social engagement.

In speculating about explanations for this sharp generational discontinuity, I am led to the conclusion that the dynamics of civil engagement in the last several decades have been shaped in part by social habits and values influenced in turn by the great mid-century global cataclysm (p. 275).

Section IV asks, “So What?” Does it actually matter that social capital has been in decline? Putnam reviews evidence that “shows that in measurable ways it matters that social capital and civic engagement have decined in America over the last several decades” (p. 295). This evidence is largely based on comparing various criteria with a “Social Capital Index” for each of the states of the USA. He finds a strong connection between low social capital and poor standards of education, children’s welfare, safe neighbourhoods, economic prosperity, health and happiness, and democratic participation.

So what is to be done? This is the subject of Section V. To answer this, Putnam turns to history. There is a fascinating chapter on the transition America faced during the “Gilded Age” (1870-1900) and the “Progressive Era” (1900-1915).

During the last third of the nineteenth century technological, economic, and social changes transformed American life. Between roughly 1870 and 1900 America evolved rapidly from a rural, localized, traditional society to a modern, industrialized, urban nation (p. 368).

But America survived. Why? It survived because of a prolonged and concerted investment in new forms of social capital.

On the contrary, my message is that we desperately need an era of civic inventiveness to create a renewed set of institutions and channels for a reinvigorated civic life that will fit the way we have come to live (p. 401).

But how will this come about? Putnam himself has been active in seeking a resurgence of civic and social engagement through various initiatives (such as BetterTogether), and there are signs that the tide is turning, at least among affluent young white people. But I was struck by some comments in the final chapter about the role of religion.

Faith-based communities remain such a crucial reservoir of social capital in America that it is hard to see how we could redress the erosion of the last several decades without a major religious contribution (p. 408-9).

This is based on history, since “it is undeniable that religion has played a major role in every period of civic revival in American history” (p. 409), particularly around the turn of the twentieth century. Putnam’s response is to “challenge America’s clergy, lay leaders, theologians, and ordinary worshipers” to “spur a new … ‘great awakening’” as a response to our crisis in social capital.