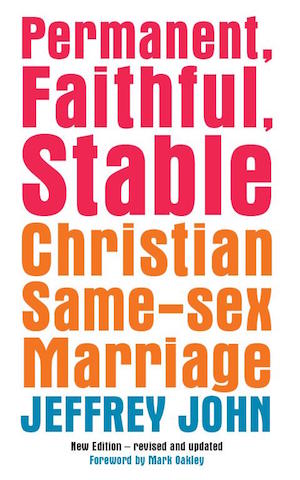 I recently read one of the most prominent books of its kind: Jeffrey John’s Permanent, Faithful, Stable: Christian Same-sex Marriage. It’s the first such book that I’ve read; I understand it might not be the best example, but it is certainly short.

Jeffrey John is Dean of St Albans, and made the headlines in 2003, when he didn’t become the Bishop of Reading, following a big fuss about his stance on same-sex relationships, not least his own. The book was first published in 1993, then again in 2000 and 2012. This most recent edition has a new preface and postscript, lamenting the lack of progress on the issue within the Church of England, and rejoicing in the developments in the UK, with civil partnerships introduced in 2005, and with same-sex marriage looming on the horizon at the time (see here and here for a couple of my posts on that particular development). You can get a clear impression of the hurt and sense of injustice that people in John’s position have experienced. Any pastoral response needs to take that into account.

The core of the book consists of three chapters: ‘Is it Scriptural?’, ‘Is it Moral?’, and ‘Is it Achievable?’. John argues that the biblical texts speaking against same-sex sexual activity are either against only some such activity, or are intended simply to make a sharp distinction between Jews and Gentiles. A couple of pages are devoted to the centurion and his servant, with the suggestion that ‘Any Jew … would almost certainly have assumed they were gay lovers’ (p. 14). On the moral question, he sees sex within marriage as ‘good in itself, quite apart from any possibility of childbirth’ (p. 26). Thus he sees no reason to consider same-sex relationships to be morally inferior. The achievability chapter tackles both the question of promiscuity and fidelity and whether it could conceivably find acceptance within the church.

I found John’s biblical exegesis strained at times. But rather than deal with that here, the thought occurred that, even supposing his interpretations are correct, his case still wouldn’t be settled. First, with one exception, John doesn’t make a positive case from any passage; he merely tries to deflect the negative case. The one exception is the centurion and his servant. John takes Jesus’ words and actions to at least hint at approval of their (alleged) relationship. I find this far from compelling. But, second, I don’t think I would make the case against same-sex relationships primarily on the basis of those few verses that address the matter directly. A broader perspective is needed.

What is completely missing in John’s approach is any sense of the significance of ‘male and female’. As NT Wright makes clear in the superb video below (prepared for the recent Vatican conference on the topic), the complementarity between man and woman is intimately entwined with a thread that runs unmistakeably through the whole Bible. The marriage relationship, between a man and a woman, is one of the clearest signposts we have, to point us towards ‘the fulfilment of God’s good purposes for creation: the coming together of all things in heaven and on earth in Christ’ (16:20).

I realise this leaves a thousand questions unanswered. Some other time, perhaps!