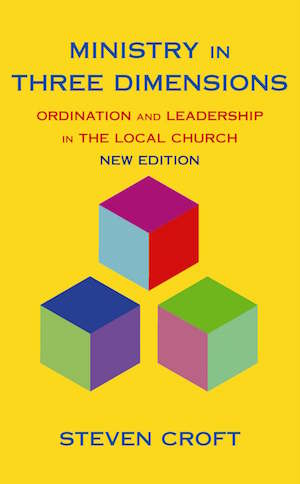 I’m writing this from the Bible Belt of the Netherlands: a strip running from the south west towards the east of the country, in which there are many conservative Protestant Christians. As a result of the pillarisation of Dutch society, for well over a century, there has been a whole ‘pillar’ of society shaped by Protestant or Reformed Christian thinking. Many or most Christians send their children to Christian schools, read Christian newspapers, listen to Christian radio stations, watch Christian TV stations (or don’t watch TV at all), and vote for Christian political parties. This has allowed the church to remain strong, even in an increasingly non-Christian society, and has allowed it to continue to operate largely in what Steven Croft refers to as ‘inherited mode’ in his book, Ministry in Three Dimensions: Ordination and Leadership in the Local Church.

Steven Croft was Warden of Cranmer Hall in Durham when he wrote the first edition of the book (1999). The second edition (2008) was written while he was Archbishops’ Missioner and Team Leader of Fresh Expressions. Since 2009 he has been the Bishop of Sheffield.

The ‘inherited mode’ he refers to is a legacy of Christendom. Church congregations are sustainable and largely self-perpetuating. Children are born into the church, nurtured in the faith, and remain in the church into adulthood. In the Dutch Bible Belt, or in certain towns and villages in England, the churches are large and exist comfortably as part of an existing community, in which people encounter one another outside of the church context in their day-to-day lives, and in which church involvement is an accepted part of many people’s lives. Or in many smaller, conservative churches in England, the church family forms a closely-knit alternative society to the world around, and is largely self-perpetuating in the same way. In either of these cases, the pastor or vicar can focus almost exclusively on what Croft calls the ‘presbyteral’ dimension of ministry, which is centred around the ministry of the word and sacrament.

However, in many churches, and perhaps most Church of England churches, this kind of ministry has not been sufficient. (Nor is it likely to be sufficient in many others in the years to come, except in certain ‘magnet’ churches in prominent cities.) The faithful have been growing old and dying, and the younger generations have not replaced them, either because they have fallen away, moved away, or not been born in the first place. Some churches have simply been shrinking and closing. Others have sought to reshape ordained ministry as ‘leadership’, drawing on secular models of management. Neither of those approaches is ideal, for obvious reasons.

Into this context, Croft seeks to draw on the rich biblical material on ministry and leadership. In particular, he seeks to draw on two often-neglected dimensions of ministry: diakonia (service) and episcope (oversight).

Many will be familiar with the historic threefold ordering of ordained ministry into deacons, presbyters (elders, priests) and bishops. Croft is by no means opposed to this (and sees hints of its emergence even in the New Testament), but his purpose is to see these primarily as dimensions of all ordained ministry, with the different orders reflecting a different emphasis. So, for example, the ministry of bishops will have an emphasis on episcope, but will nonetheless be shaped by diakonia, and have a strong presbyteral dimension. This reflects the New Testament usage, perhaps most strikingly in Acts 20, in which Paul speaks to the elders in Ephesus, emphasising the importance of both service (diakonia) and exercising oversight (episcope).

The book deals with each of these dimensions in turn, first diakonia, then the presbyteral dimension, then episcope. In each case, the biblical material is examined, followed by the Christian tradition, and then many practical lessons are drawn for contemporary ministry, primarily for those serving in a local church context. All of this is extraordinarily helpful. However, the final chapter, added for the second edition, hints at how the book might have taken a different shape, had a rewrite of the book been possible.

On episcope, in this final chapter, Croft now places the emphasis on the ordained ministers watching over themselves (‘Keep watch over yourselves and over all the flock’, Acts 20:28). Other elements of episcope include enabling the ministry of others, and giving vision and unity to a church while helping it to navigate change. For this essential dimension of ministry, ‘There is much that the Church can learn from good practice developed over many years in the commercial world or in the public sector’ (p. 27). However, this wisdom should be appropriated without turning ordained ministry into a form of ‘leadership’ modelled on the surrounding culture.

In particular, and in contrast to models of leadership and management, all ordained ministry should retain the dimension of diakonia: Christian service. This is ‘the most important of the three dimensions if ministry and leadership are to be truly Christian and Christ-like’ (p. 45). This will include simple, hidden, practical acts of service, service to the community, competent and careful administration, listening to others, humility and integrity.

The final chapter of the book takes diakonia in an interesting direction. Croft draws on the work of John Collins, who ‘argues that the root meaning of [diakonia] in the New Testament is actually better understood not only as loving service but also mission or agency. A diakonos is primarily someone who is sent on behalf of someone else’ (p. 202). Croft links this closely with the ‘Fresh Expressions’ movement of the past decade or so, which is not so much about sustaining existing communities, as about ‘forming new communities through contextual mission’ (p. 201). Someone whose ministry is shaped by diakonia will be a pioneer, seeking to take the gospel beyond the world of the existing congregations and into new ground.

Like the apostle [Paul in Ephesus], we too are called to these different ministries within one body of Christ: to sustain existing communities through the ministries of word and sacrament; to pioneer new communities to connect with those who are right outside the churches and to exercise oversight over the whole church, connecting the different parts together and enabling the church to be built up and God’s kingdom extended. The calling of all of the ordained is to ministry in three dimensions (p. 210).