We live in an age of ecclesiastical chaos. Never before have so many wildly different kinds of churches existed side by side in the same towns and cities. And while these churches are invariably friendly towards each other, only occasionally do they think of each other as being basically on the same page. On the contrary, they generally view each other with a bemused sense of bafflement, wondering how on earth what they do week by week can in any sense be thought of as being ‘Church’. 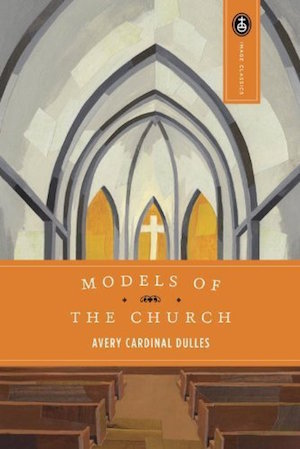 Into this kind of situation a book such as Models of the Church by Avery Dulles (1918-2008) is extremely helpful. He sees the Church as ultimately being a mystery, that is, a reality ‘of which we cannot speak directly’ (p. 2). As such, rather than searching for tight definitions, we have to employ images, or analogies, or types, or models. Viewed in this way, our radically different understandings of the Church might each contain some elements of truth, and might be able to complement and sharpen each other, rather than being in direct opposition.

Dulles was an American Cardinal, theologian and Jesuit. His book was first published in 1974, then extended in 1986, and then published again in 2001, with a new appendix. It is largely written in the context of Vatican II (1962-5), but, as an ignorant Protestant, I still found it fascinating and illuminating, both for my own understanding of the Church, as well as being an enlightening glimpse into Roman Catholic thinking.

The book is built around five models of the Church (with a sixth introduced in the final chapter of the 1986 edition). I’ll deal with them in a different order, to suit a more Protestant audience.

First, then, we have Dulles’ fourth model, that of the Church as herald, which ‘sees the task of the Church primarily in terms of proclamation’ (p. 69). Following Barth,

This model has many strengths, but also several weaknesses. For example, it fails to reflect the biblical view of the Church as ‘a real, visible community existing continuously in world history’ (pp. 77f.). It also ‘focuses too exclusively on witness to the neglect of action’ and is ‘too pessimistic or quietistic with regard to the possibilities of human effort to establish a better human society in this life, and the duty of Christians to take part in this common effort’ (p. 79).

Perhaps we need to draw on Dulles’ fifth model, that of the Church as servant? While this model, in isolation, could be very weak, it does contribute some helpful insights. Evaluating the models in connection with eschatology, Dulles writes,

From the fifth model, finally, I would accept the thesis that the Church has the task of introducing the values of the Kingdom into the whole of human society, and thus of preparing the world, insofar as human effort can, for the final transformation when God will establish the new heavens and the new earth (p. 113).

The word-centred kind of Church with which I am most familiar would typically stress that the proclaimed word should give rise to a loving community, which fits closely with Dulles’ second model, that of the Church as mystical communion. This reflects the biblical images of the Church as the People of God, or as the Body of Christ, both of which ‘emphasize the immediate relationship of all believers to the Holy Spirit, who directs the whole Church’ (p. 45).

But again, this mystical, invisible understanding of the Church fails to do justice to its visible elements, such as its sacraments and structures of leadership.

Dulles’ first model of the Church as institution, sounds very much like the Roman Catholic model, from the perspective of an outsider. But, interestingly, it ‘has been displaced from the center of Catholic theology since about 1940’ (p. 21), and faces sharp criticism in the book. But it does have some strengths.

It is imperative for the members of the Church to be able to find the continued presence of Christ in the Church as a visible society. The institutional model has the great merit of giving due emphasis to the Church’s ministry of perpetuating the work of Christ as Teacher, Savior, and Ruler (p. 196).

The third model, the Church as sacrament, attempts to use sacramental theology to combine the visible and invisible aspects of the Church, highlighted by the first and second models, respectively. The Church, however imperfectly, is an effective sign of Christ’s presence.

Dulles initially singled out the sacramental model as the most promising starting-point for building a well-rounded view of the Church. But in the second edition he introduced a sixth model, that of the Church as community of disciples. This image relates well to the other five: the visible community of disciples was instituted by Christ, exists as a community, symbolises and embodies Christ, proclaims the gospel, and continues his work in the world.

Dulles book ‘[does] not constitute a rounded systematic ecclesiology’ (p. 195). But the vivid images developed in the book perhaps provide a constructive way of embarking on that task. They are certainly very useful as we seek to understand and relate to other parts of the Body of Christ.