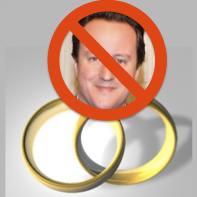 Same-sex marriage: is there a way forward?

Is there a way forward, which would allow people to live out their sincere beliefs, and not find themselves at odds with the state or fighting with each other?

We think there is.

Simply this: remove the word "marriage" from UK law altogether.

Couples would be able to register a civil union, and it would be up to individuals whether or not they want to refer to that union as "marriage". Politicians and state officials would no longer have the power to override your convictions and tell you who is, or is not, married.

Keep politics out of marriage: get "marriage" out of the hands of politicians.