I've been reading Creation Regained, a little book (117 pages plus postscript) by Al Wolters. It's really very good. I thought I'd share a few extracts with you (both of you). First, the cover: 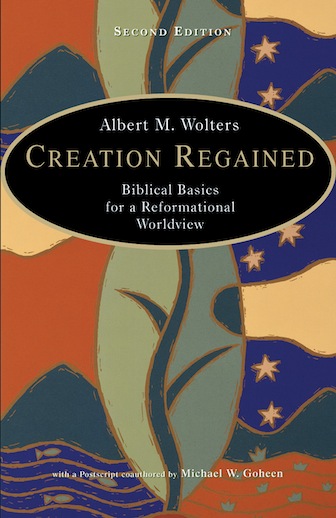 After the cover, the first chapter—What Is a Worldview?—introduces the theme of the book, which is "an attempt to spell out the content of a biblical worldview and its significance for our lives" (p.1). A worldview is defined as "the comprehensive framework of one's basic beliefs about things" (p.2). Everyone has a worldview, which emerges "quickly enough when they are faced with practical emergencies, current political issues, or convictions that clash with their own" (p.4), and "our worldview functions as a guide to our life" (p.5). Unpacking that a bit more, Wolters introduces two key terms that will feature throughout the book: structure and direction. Our worldview tells us how everything is structured, and our worldview tells us about the basic direction things are taking through history.

the basic definition of the Christian faith given by Herman Bavinck: "God the Father has reconciled His created but fallen world through the death of His Son, and renews it into a Kingdom of God by His Spirit."

The biblical worldview presented in the book is one which takes

all the key terms in this ecumenical trinitarian confession in a universal, all-encompassing sense. The terms "reconciled," "created," "fallen," "world," "renews," and "Kingdom of God" are held to be cosmic in scope (p.11).

Now, this might not seem particularly out of the ordinary, but many (perhaps most) Christians would, in practice, tend to limit the scope of these terms. There would be a "sacred" realm and a "secular" realm, where the "secular" realm is perhaps not entirely fallen, not entirely reconciled, or destined to be discarded rather than renewed, and where the "sacred" realm is perhaps something over and above what God originally created. So, in order to distinguish this cosmic-in-scope biblical worldview, it is often called the reformational worldview, partly because it builds on some emphases associated with the Protestant Reformation, and partly because this worldview carries within it the hope that nothing of the created order will be rejected or replaced, but that the entire created order will be—and is being—reformed, renewed and restored: creation regained. (Another way of identifying this view of things is to say that "grace restores nature", p.12.)

The next chapters look in more detail at the components of this worldview, looking at the structure and original direction of things (Creation: part 1, part 2) and then the story of the shifting direction of things (Fall and Redemption), before unpacking what difference this might make to our lives (Discerning Structure and Direction). The postscript (with Mike Goheen) sets this whole discussion in a broader framework of the biblical narrative.