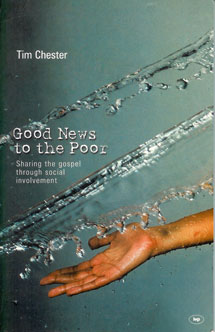 The first two chapters make the case for Christian social involvement, which finds its roots in the character of God, who "upholds the cause of the oppressed and gives food to the hungry" (Ps. 146:7-9, NIV), in the reign of God, and in the grace of God. On the reign of God, "The Bible is the story of God re-establishing his liberating reign over the world", and in the Lord Jesus Christ "The new age of liberation has begun in the midst of the old age of death" (p.26). And on the grace of God, "The more we understand the wonderful grace of God to us in our need, the more our hearts will be open to the poor and marginalized" (p.30). How remarkable then that so much contemporary Christianity in the UK has so little concern for the poor! So often our faith becomes no more than a private faith, having retreated from the public realm centuries ago in the wake of the Enlightenment.

However, social action alone is not enough, because the case for evangelizing the poor is strong. We must consider the priority of the future, and the fact that people have an eternal destiny in the resurrection. So people's most pressing need is the need for reconciliation with God through Jesus Christ. It is important to maintain the centrality of proclamation of the Good News in meeting this need. But what is the relationship between social involvement and Gospel proclamation? Evangelism and social action are distinct activities, but proclamation is central, and evangelism and social action are inseparable, simply because "In our involvement in the lives of others we cannot choose to ignore their social needs" (p.66). The "text" of our Gospel proclamation takes place in the "context" of loving actions and loving community.

Chapter 5 looks at social involvement and the kingdom of God: if there are improvements in social justice, does that mean the kingdom of God is advancing? (This was the thinking behind the 'social gospel' movement of the early 20th Century.) It is true that God has been sovereignly working throughout history, bringing many good things through what is known as his 'common grace', even where people do not acknowledge him. "But the coming of Jesus represented something new: the coming of Jesus meant that 'the kingdom of God has come to you' (Luke 11:20; see also Mark 1:14-15; Luke 17:20-21)" (p.80). So how should we speak of this new work of God? Following the New Testament, we can say that the kingdom comes secretly, not in glory and triumph; the kingdom comes graciously in this present age, and not (yet) in power and judgement; the kingdom comes through God's word, forming a new community shaped by this word; and the kingdom will come in glory, when Jesus once again appears on the earth.

So what is this good news to the poor? First, is is a message of liberation. God's reign of justice and peace is good news especially to those who are enslaved in any way at the present time, whether that is economic, physical, social or spiritual. It is primarily a message about future liberation. "But the new regime has begun among Christ's community of the broken. The Christian community is the place of liberation" (p.87). Second, it is a message of grace: "God's promise of forgiveness and liberation does not depend on our status, education or wealth" (p.97). And, third, it is a message of community: "the coming liberation of God is anticipated in the liberating relationships of the Christian community" (p.97).

But if there is good news to the poor, is there also good news to the rich? There is. The message of Jesus exposes the lie of consumerism, and in its place gives us the good news of Christian contentment. From 1 Timothy 6, this good news is an invitation to find your joy in God, find your security in God, enjoy God's good creation, and live for God's new creation, as part of a gospel-centred life.

Third, Christian social involvement will be marked by following the crucified Lord. "Often it is assumed that if Christians can get their hands on the levers of power, then all will be well" (p.149). This was the thinking behind "Christendom", and that mindset still continues into the present. But "Christians are called to follow the way of the cross" (p.149). "Christian ministry ... is conducted through the upside-down, unpredictable power of the cross. It is conducted through weakness and dishonour" (p.150). So as the church "gives witness to the good news of the kingdom in this way, it may well be that it is persecuted. The church enters the political realm not to make itself powerful or secure, but to be weak and vulnerable in love; to be in solidarity with those who are weak and powerless" (p.161).

So can we make a difference? Yes, by the grace of God, we can indeed make a real difference. But we need to have realistic expectations. While we seek eagerly and diligently to help the poor, we need to remember that "sin is a universal trait of humanity — both rich and poor" (p.169). The exploited people of today can quite easily become the exploiters of tomorrow. So, as Jesus said, "the poor you will always have with you" (Mark 14:7, NIV).

Only in the eschatological future will poverty be eradicated. But even now within history this future can be glimpsed. And it is glimpsed among those people whose rebellious hearts are being transformed by the grace of the gospel. It is glimpsed in the community in which the rule of God has begun to take shape. ...

We may see reform in society; we may not. The important thing is for the church to witness to the coming liberation of God. We are called to be the jubilee community in which the poor are welcomed, included and strengthened. We are the place of earth where God's future can be seen (p.175-6).