Well, it's finally here: HerMES: point source catalogues from deep Herschel-SPIRE observations, by yours truly and lots of other people otherwise known as "Al".

Some of the catalogues are available here, if you're interested.

The biggest challenge was confusion (about which there is a great deal of confusion). For example, in this HerMES image, everything you can see is light from galaxies, and each galaxy produces a small round blob in the image. The number of galaxies is so high, that light from any one galaxy is confused with light from numerous neighbouring galaxies. 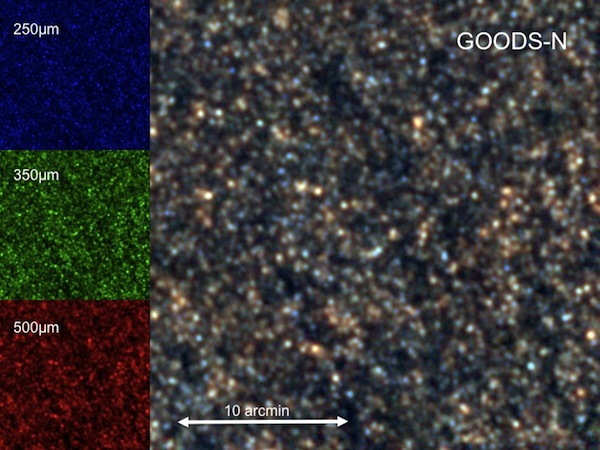 It's difficult to tell. But what you can do (and what we did in the paper) is to stick fake galaxies (blobs) into the image, and see what difference that makes. So if we have a fake galaxy with brightness 30 mJy, and we put it in at a random position, what effect will that have, on average? What is the probability that it will be detected? (This is approaching what we mean by the completeness of the catalogue, although it is far from easy to know what is meant by those simple words "it" and "detected"!) What brightness will it be measured to have, on average? 20 mJy? 30 mJy? 40 mJy? 100 mJy?

For very bright galaxies, it's relatively straightforward. But for fainter things, it can do your head in...