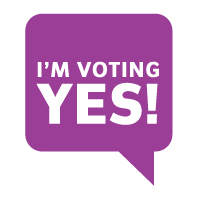 Just a reminder that, for me at least, May is the month for saying "Yes!"

And here is why I would recommend a "Yes!" vote in the alternative vote (AV) referendum this Thursday.

See the Electoral Commission website for details about the referendum and what AV is, and the Electoral Reform Society website for more about why AV is better than our current system, first past the post (FPTP).