Christians celebrate today (on good evidence) that Jesus Christ was raised from the dead.

But they also believe that they themselves will share in Jesus' resurrection.

What does this mean?

They might mean one of three things, as in this image from a sermon I preached last year at Calvary Evangelical Church, Brighton: 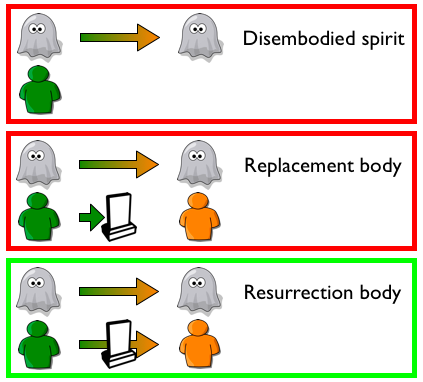 1. By saying that Christians will share in Christ's resurrection, they might mean that Christians will live on as disembodied spirits. This belief is remarkably widespread in popular Christian thinking, Christian hymns and songs, and in what non-Christians think Christians believe. It may be expressed as, "When Christians die, their souls live on in heaven, where they will be with God for ever." But this is certainly not what the Scriptures teach, and is contrary to orthodox Christian teaching. For example, two of the most important creeds of the early church, the Apostles' Creed and the Nicene Creed, both explicitly deny that we will spend eternity as disembodied spirits in heaven, the former speaking of "the resurrection of the body" and the latter speaking of "the resurrection of the dead". In fact, this idea owes more to Greek thought, as the ancient Greeks despised bodies and believed that one day their souls would be set free from the constraints of being embodied.

2. By saying that Christians will share in Christ's resurrection, they might mean that Christians will get a replacement body in the life to come. In other words, when Christ returns he will inaugurate the life to come, and in that life to come we will have bodies. But those new bodies will be a completely new bodies, having no continuity with our current bodies. (Examples of this would be some Christians who see death and suffering as so intrinsic to the current physical nature of life that the only way they can conceive of a world without them is if the world to come had a radically different physical constitution, perhaps with life based on something other than carbon.) This is better, as it affirms an important Christian belief: that to be fully human, you need a body. But in denying any continuity it denies that this body matters at all. You might as well do whatever you like with this body, as it's going to be thrown away and replaced with a new one. And it also ignores the empty tomb: if "resurrection" means that we get a replacement body, then why was Jesus' tomb empty?

3. By saying that Christians will share in Christ's resurrection, they might mean that Christians' bodies will be raised as resurrection bodies in the life to come. This is what happened to Jesus: his old body was raised (continuity) and transformed (discontinuity) into a resurrection body. This is the orthodox Christian teaching about resurrection. And it matters! If we're going to be disembodied spirits in heaven, or if this present physical Universe is going to be zapped and replaced with something else, then why does it matter what I do with this body? Nothing good that I do with this body will have any lasting consequences, and nor will anything bad that I do with this body. All that matters is people's souls, and we can ignore people's bodies, and everything else that is physical, as nothing physical has any ultimate significance. No, this body matters, and whatever we do now, in this body, is not in vain, but will have lasting consequences into eternity - because this body will be raised. And that's the good news of Easter Day.

Therefore, my dear brothers, stand firm. Let nothing move you. Always give yourselves fully to the work of the Lord, because you know that your labour in the Lord is not in vain (1 Corinthians 15:58, NIV).