What did the Middle Ages ever do for us—for science in particular? Not a lot, I hear you say? The Greeks laid the foundations, and then, after the fall of Rome, a great darkness descended on the intellectual world for about a thousand years. During this time no major advances were made, and any attempts to make progress were swiftly suppressed by the dominant ecclesiastical establishment. Then, finally, the light began to dawn, the classics were rediscovered, reason broke free from tradition, and the modern era was born. 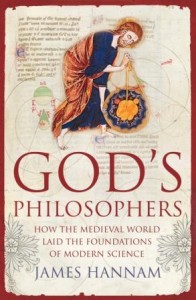 Not at all, says James Hannam in his recent and highly accessible book (with a wealth of highly inaccessible contemporary scholarship to back him up). God's Philosophers: How the Medieval World Laid the Foundations of Modern Science (Icon Books, 2009) seeks to do away with the simplistic and inaccurate view the most people (myself included) have tended to have concerning intellectual achievements of the Middle Ages.

But how could such a misrepresentation arise? Quite easily, in fact. History can easily been rewritten, or re-spun, to give the impression that all that went before was insignificant ("Middle Ages") and repressive ("Dark Ages"), but that now we have life ("Renaissance"), light ("Enlightenment"), progress ("Modern") and real transformation ("Reformation" and "revolution", even "scientific revolution"). Anyone with an axe to grind against their predecessors will soon pile in to reinforce the stereotypes.

So what did these "Middle Ages" do for modern science? The rest of the book takes us on a remarkably enjoyable whistle-stop tour of the period to find out, as we meet one "giant" after another. There's Boethius (480–525) who, in his hugely influential The Consolation of Philosophy, provided the Latin-speaking world with continued access to Greek scholarship, even after the language faded from use. Then there's Gerbert of Aurillac (c.940–1003), "the most learned man in Europe", who introduced some of the riches of Muslim scholarship to a Christian audience before becoming Pope Sylvester II, the "Mathematical Pope". And so it continues, as discussions about mathematics and science, the nature of physical reality, the use of dissection and great technological advances are mingled with the colourful life stories of many remarkable individuals. Amongst them are Anselm (1033–1109), Peter Abelard (1079–1142), Thomas Aquinas (1225–74), Roger Bacon (1214–92), Richard of Wallingford (1292–1336), William of Ockham (c.1287–1347), the 14th-century Merton Calculators, John Buridan (c.1300–c.1361), and Nicole Oresme (c.1325–82), who gave arguments to show that the earth was rotating (everyone knew it was round, of course). (The book's List of Key Characters came in handy for writing that bit!)

Particularly interesting to me, as someone largely ignorant of the subject, were the five chapters on the origins of modern astronomy, with Nicolaus Copernicus (1472–1543), Johann Kepler (1571–1630), Galileo Galilei (1564–1642) and their buddies.

Full disclosure (somewhat belated): I was sent a copy of the book for review by the author.