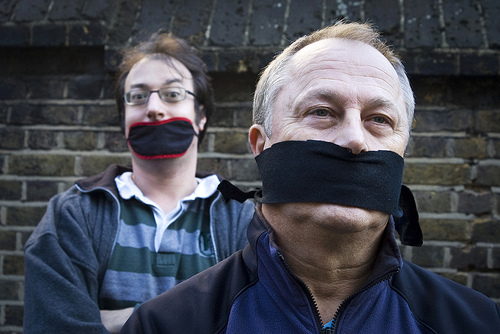 As a Bible-believing Christian, I am deeply committed to freedom of expression and to tolerance (for example, of those with whom I deeply disagree).

But it seems I am in a minority. Certainly I would be, in the House of Commons. The House of Lords previously secured the place of a "free speech" clause in the legislation for the recently-introduced homophobic hatred offence (an amendment tabled by Lord Waddington). This has been vigourously opposed by the Government, who are now trying to remove this clause. Here is the wording the Government finds so objectionable:

From the government's determined efforts to remove these words from the statute books, one may conclude that the Government would like it to be the case that if I merely express the belief that certain sexual conduct is wrong, then that may, of itself, be taken to be a "hate crime".

Just think for a moment about what this means. Does no one believe in freedom of speech any more? Sure, my beliefs may be utterly repugnant, but should it be illegal for me to discuss them with anyone? Seriously?

Thank God for our unelected representatives in the House of Lords, who at least seem to believe in democracy and freedom of expression. But if the government has its way, we're certainly going to see more cases like this and this.

What do you think? Is freedom of speech worth fighting for? Or are there some beliefs that are so obnoxious that it should be illegal to express them, under any circumstances?